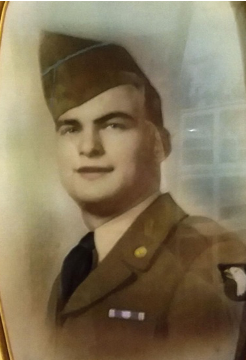 Harold James Freymuth, was born 9-7-1928.  His father was Felix Edward Freymuth (1891-1962).  His mother was Nancy Jane “Nannie” Dyer Freymuth (1892-1979).  He had five sisters; Catherine, Ursula, Lucille, Dorothy and Helen.  He had two brothers: Bernard and Anthony.  Harold was married to Geraldine A. Wortmann.  Harold registered for draft 9-SEP-1946.  He worked for his father Felix.  Harold and Geraldine lived in O’Fallon MO.

Harold was badly burned on the face and eyes last June but later returned to the front.  US Army Sergeant Harold Freymuth was with the 32nd Infantry Regiment,  7th Division. Harold was killed in action 15-OCT 1952 in North Korea.  He was scheduled to leave for home in two weeks.

Triangle Hill, as it was named by the UN command, was a forested hill that appeared as a V shape when seen from the air or on a map. Hill 598 sat at the tip of the V and overlooked the Gimhwa Valley less than 2 km (1.2 mi) to the south. From this apex, two ridges extended to the northeast and northwest. The ridge to the northwest is dominated by a hill nicknamed “Pike’s Peak”. The other connects to a pair of hills that had been dubbed “Jane Russell”.

Both Major General Wayne C. Smith and Lieutenant General Chung Il-kwon, commanders of the US 7th Infantry Division and the ROK 2nd Infantry Division respectively, relieved exhausted battalions daily to maintain troops’ morale.  On 15-OCT Smith ordered the 1st Battalion, 32nd Infantry Regiment and the 2nd Battalion, 31st Infantry Regiment to be placed under the command of Colonel Moses to resume the attack on Triangle Hill.  Similarly, Chung Il-kwon replaced the 2nd Battalion, 32nd Regiment with the 2nd Battalion, 17th Regiment.  Later that day both US battalions captured Hill 598 and Sandy Ridge after meeting only light resistance, but the PVA tunnels and a counterattack by the PVA 135th Regiment prevented the Americans from advancing towards Pike’s Peak and Jane Russell Hill.  The ROK, on the other hand, were thrown back by a PVA counterattack after recapturing Sniper Ridge.

It is believed Harold Freymuth was killed in action at the Battle of Triangle Hill and Sniper Ridge.