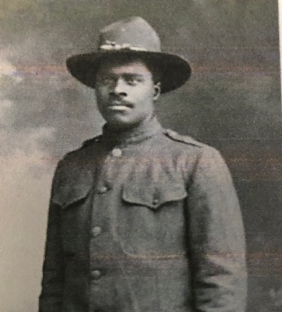 William “Willie” Galloway was born 28-JUN 1895 in Gilmore MO and later lived in adjacent Wentzville, MO.  Willie’s parents were Edward and Phoebe Galloway who lived just east of Hopewell Baptist Church on Highway N.  Willie had two brothers; Moses and Louis.  Willie, the youngest was a laborer on the Thomas Slattery farm near O’Fallon MO.  A few months after their father died in 1918, all three brothers enlisted in the Army.  All three served during World War I.   Sadly, only one of the brothers would return home.

He was assigned to the 805th Pioneer Infantry, nicknamed the “Bearcats.”  Willie departed the states 4-SEP 1918 on the Saxonia Troop Ship from Quebec Canada. Willie’s unit was Company H of the 805th Pioneer Infantry, an all-African American regiment of the United States Army during World War I. The 805th contained black soldiers from the state of Mississippi. The regiment landed in France in JUL-1918 and served in Europe until JUL-1919; the division saw 39 days of action.

William Galloway was one of 350,000 African-Americans drafted during the war and assigned to segregated units in the Army.

Moses Galloway whose unit was the 425th Reserve Labor Battalion would return from the war.  He farmed in Callaway Township and died in 1978.  He is buried in Jefferson Barracks National Cemetery.  Louis whose unit was the Company L of the 805 Pioneer Infantry died in camp 10-OCT 1918 of pneumonia just twenty five days after arriving in Europe.  He is buried in Oise-Aisne American Cemetery in France.

On 6-OCT 1918 the 2nd Battalion of the 805th infantry, which included H Company were ordered to march from Clermont-En-Argonne to Avocourt to build and repair roads.  This would be the first time the men were ordered to the front.  Their first night they experienced a gas attack by the Germans.  In the month they spent at Avocourt, German planes bombed their camp nearly every day.  Their regimental historian would write they are “under continuous shell fire.”

On 14-OCT 1918, about a week after his arrival, Private William Galloway was killed in action.  He was killed just four days after his brother died.  It is believed he died by German shell fire.  Willie Galloway was the only African-American from St. Charles County to die in action in World War I.

There was no burial record file for Willie or Louis.  For some reason, Galloway’s mother decided  to have the government repatriate only the remains of William, leaving Louis in his French grave.

It is also not known why Mrs. Galloway decided to have William’s body reinterred in Arlington National Cemetery instead of back in St. Charles County.  Though William Galloway’s work was with pick and shovel, it would be foolish to conclude his contributions were less important than work done with rifles and cannons.  William Galloway like tens of thousands of other Americans in World War I was killed in action while he served his country.

Willie Galloway was buried in Arlington National Cemetery on 14-JAN 1921.

Willie Galloway is honored and remembered at the St. Charles County Veterans Museum.