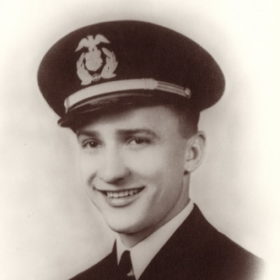 Honoring Those Who Died While Serving Our Country 19-AUG 1943

George S. Hord married Vanita Zeugin in Fulton, Missouri. They had one child during their marriage.  He had enlisted in the Merchant Marine and served during World War II. He had the rank of Merchant Seaman and his occupational specialty was Radio Officer.  Vanita lived with her parents in Defiance MO when George went to sea.

Later, George received his FCC License and was commissioned an Ensign.  New Orleans was his sailing port.  George had just completed one trip to Trinidad and was preparing for another voyage.  George had just been home on leave from mid-June to the middle of July at his home in Tibbetts MO.  George was assigned to the American flag freighter J. Pinckney Henderson.  A new “Liberty ship,” this would be the maiden voyage of the J. Pinckney Henderson.  Liberty ships were a class of cargo ship built in the United States during World War II. Though British in concept, the design was adopted by the United States for its simple, low-cost construction.  Mass-produced on an unprecedented scale, the Liberty ship came to symbolize U.S. wartime industrial output.

On 14-AUG 1943, another cargo ship, the J. H. Senior left New York for the United Kingdom, via Halifax, with a full cargo of gasoline supplied from the New York Petroleum Pool and consigned to the British Petroleum Board.  She had a deck cargo of airplane fuselages, 21 cases of airplane wings, and one case of guns, consigned to The Commanding Officer, U. S. Forces, United Kingdom. The vessel was manned by a Danish crew of 46 officers and men and carried a U. S. Navy gun crew of 28 with one officer and 27 enlisted men.

Late at night on 19-AUG 1943, the J. H. Senior was proceeding in convoy when, in a dense fog and at a point about 600 miles due east of Halifax, she collided with the American flag freighter J. Pinckney Henderson, owned by the United States Maritime Commission and operated by the United Fruit Company.  As a result of the collision and an ensuing fire, the two ships were gutted throughout.  All but nine men of both vessels were lost.  The tanker and freighter were eventually brought to port.

The J. H. Senior was removed in tow from St. John’s, Newfoundland, to Halifax and then to New York, where she arrived in a damaged condition in November 1943.  Because of the large number of cargo ships lost early in the war, every cargo ship that could be saved, and towed back to Sydney or Halifax, could be repaired, and sent back into the Battle of the Atlantic. Every ship was important.

Given these serious conditions on the convoy routes, it was understandable that the authorities were intent on saving the SS J. Pinckney Henderson, if it was at all possible. At 441 feet long, and 56 feet wide, she could travel at a speed of 11 knots, and could carry more than 10,000 tons of cargo.

When the War Shipping Administration released details of the catastrophe to the press in March 1944, the New York Herald Tribune noted that “the J. Pinckney Henderson was loaded with an inflammable cargo, which included thousands of bales of cotton, tons of magnesium, glycerin, resin, wax, and oil.”

The 34 deceased sailors of the J Pinkney Henderson were buried at a cemetery at Sydney where a monument erected.  Shortly after the World War II, the bodies were returned to the USA and buried at the Jefferson Barracks National Cemetery.  The monument, no longer needed, was donated to the American Merchant Marine Academy, King’s Point, New York.  The monument languished in obscurity and then was buried away at the Academy until 22-MAY 2003, US National Maritime Day, when it was discovered and ultimately re-erected as a memorial to mariners who lost their lives in wartime.  Amongst the dead of J Pinkney Henderson (64 of 67 crew; only 32 bodies were recovered) were two cadet-midshipmen from the Academy.

*Note, there is conflicting information about George S. Hord in particular the day he died.  We believe with a great deal certainty, 19-AUG 1943 is correct.