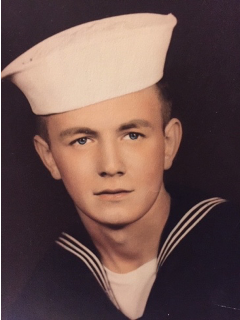 Albert Wehde (Jerry) was born on 24-DEC 1943 at home in Old Monroe, Missouri. His father was Diederich Stephen Wehde (1902-1962) and his mother was Helen Bernice Miller Wehde (1907-2000). He went to Immaculate Conception Grade School and Winfield High School.  Jerry grew up on a farm that had been in the family for three generations.  Like most “farm boys” he liked to climb trees, ride horses, play in the hayloft, fish, go sledding and ice skating. Jerry had a natural ability with animals.  He loved all creatures and had a goose, a dog and horses for pets. Our mother liked to tell the story that he had a goose named Louie until it laid an egg and then the name was changed to Louise. In high school Jerry played on the basketball team and played baseball in the summer.

He enlisted in the Navy on 3-MAR 1964.  Jerry was on his second tour on duty in the Gulf of Tonkin during the Vietnam War, when while serving aboard the Forrestal, an explosion occurred which set off additional explosions of bombs and planes on the flight deck.  This was the worst naval disaster in a combat zone since World War II.  The lives of 131 crewman were lost including Jerry’s on 29-JUL 1967.

From the official investigation report:

On 29-JUL 1967, USS Forrestal (CVA/CV-59) suffered a catastrophic fire during flight operations while on Yankee Station off the coast of Vietnam. Wracked by eight high-order explosions of thin-shelled Korean War–vintage bombs and a number of smaller weapons explosions, the world’s first supercarrier was mere minutes away from the bottom of the Gulf of Tonkin. In its wake, the fire claimed 134 Sailors and Airmen, and seriously injured or burned another 161. Of those who died, 50 died where they slept. Many more were wounded but did not report their injuries because of the severity of those of their shipmates.

Forrestal was the first Atlantic Fleet carrier on Yankee Station, and she had been there only five days. As the ship prepared for its second strike of the day, at 1050, everything changed. The Navy in its definitive report on the event—Manual of the Judge Advocate General Basic Final Investigative Report Concerning the Fire on Board the USS FORRESTAL (CVA-59)—concluded that a stray electrical signal ignited the motor of a Zuni rocket carried by an F-4B Phantom II on the starboard quarter and shot across the deck, striking the external fuel tank of a fully armed A-4E Skyhawk on the port. At least one of the Skyhawk’s M-65 1,000-lb. bombs fell to the deck, cracked open, and was burning with a white-hot ferocity.

The carrier’s fire crew responded immediately. Fifty-four seconds after the initiation of the fire, Chief Gerald W. Farrier, head of the firefighting team, attacked the cracked and furiously burning bomb with a hand-held extinguisher. Twenty seconds later the hose crew arrived and fought the periphery of the fire. At slightly more than 90 seconds into the fire, the bomb exploded. Nine seconds later a second 1,000-pounder exploded with even more ferocity, hurling debris nearly 1,000 feet away at the bow.

The explosions of the large, old weapons blew holes in the armored flight deck above spaces primarily set aside for crew berthing. Flaming and unburned fuel, water, and foam cascaded down into the compartments. Battling the fires below deck was more difficult than that topside with the confined spaces, little light, thick black smoke, and toxic fumes. Although the fire on the flight deck was controlled within an hour, fires below deck raged until 0400 the next morning.

Twenty-one aircraft were destroyed and another 40 damaged of the 73 on board at the start of the fire.

Although the investigation report cited errors of safety checks on the Zuni rocket, it concluded that no one on board was directly responsible for the fire and subsequent explosions and recommended that no disciplinary or administrative action be taken against any persons attached to the ship or its air wing.

Forrestal received emergency repairs over eight days at Subic Bay, The Philippines, before sailing for complete repair at the Norfolk Naval Shipyard in Portsmouth, Virginia. She went on to serve until 11-SEP 1993 when she was decommissioned after 21 deployments. She never made another Vietnam cruise.

“For heroism on 29 JUL 1967, while serving with attack Squadron Sixty-Five embarked on USS Forrestal (CVA 59), in the Gulf of Tonkin, Upon observing fire which was engulfing bomb -laden aircraft on the flight deck of Forrestal, Petty Officer Third Class Wehde unhesitatingly ran from his relatively safe location to an exposed firefighting station.  Despite the grave personal danger, he led a fire-fighting team to with in a few feet of a flame-engulfed aircraft in an attempt to halt the spread of the fire.  Although the fire intensified , he steadfastly remained at his post, sacrificing his life as a result of an explosion. His courageous and inspiring efforts were in keeping with the highest traditions of the United States Naval Service.”

His sister attended a reunion of Forrestal crew members.  She noted:

In speaking with those who served with him at a reunion of Squadron Sixty-Five they mentioned several times his quiet nature, his big grin and his love for faith and family.*

Gerald Albert Wehde is Honored on Panel 24E, Line 48 of the Wall.  He buried at Immaculate Conception in Old Monroe, MO.

Jerry is honored and remembered at the St. Charles County Veterans Museum.