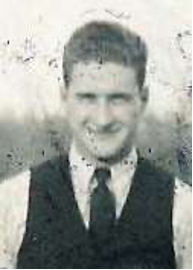 Floyd H Gilcrease was born 7-JUL 1914 in Leslie MO. Floyd’s parents were John Thomas Gilcrease (1874-1940) and Rebecca Ann Scott Gilcrease (1876-1929). He had four brothers. Three of the four died at birth. Only one brother lived, David Clarence Gilcrease. He had three sisters; Ina (died at one year), Hilda and Cecelia. Floyd registered for the draft 16-OCT 1940. He was self-employed at the time, living in Wentzville MO. Before Floyd entered service, he was employed at the Weldon Springs TNT factory.

Floyd entered the service in the Army Air Corps. He attained the rank of Sergeant in an Anti-Sub unit as a gunner. From the Wentzville Union on 4-JUN 1943: “From the public relations officer of the Army Air Forces at Panama City FL, we received the following letter. ‘Floyd H. Gilcrease (former Kroger manager here) today wears the silver wings of an aerial gunner in the Army Air Forces. He received the right to wear the coveted insignia and was promoted to the grade of Sergeant after successfully completing training at the Army Air Forces Gunnery School at Tyndall Field. He was thoroughly trained in operation of .30 and .50 caliber machine guns first on ground ranges and later in the air in preparation for service as a crew member on a bomber.”

Floyd’s plane, a B-25M bomber, crashed somewhere off the Pensacola Coast during a routine flight. Ultimately Floyd (and the crew) was declared dead on 23-JUL 1943.

From an official report supplied by David Koch, a nephew of Edward W. Simpson a crew member: On the MACR, Missing Air Crew Report, I found his name. The Department of the Air Force sent me the report and it states that:

1. Reference is made to your telegrams dated 26 July 1943, reporting the following personnel of 21st Antisubmarine Squadron as missing since 23 July 1943, while on a routine flight over the Gulf of Mexico from Gulfport, Mississippi, to Tampa, Florida.

4. The facts cited by the Commanding Officer, 21st Antisubmarine Squadron, do not appear to justify a reasonable presumption of survival. To the contrary, they lead only to a conclusion that subject personnel are deceased.

You are requested to give this matter careful investigation. Unless facts can be reported which could lead to a logical conclusion that subject personnel survived the loss of their aircraft, a report of death is appropriate.

By order of Secretary of War.

In compliance with basic communication the following information is submitted with regard to Paragraph 2.

A reasonable length of time has expired since the aircraft was reported missing for the crew members to have been picked up by searching vessels or to have reached shore safely. In view of these circumstances, this headquarters considers the crew as missing.For the Commanding Officer, Thomas E. WhitsonA hospital admission form states: “Diagnosis: Others not specified; Causative Agent: Aircraft, heavier than air.”