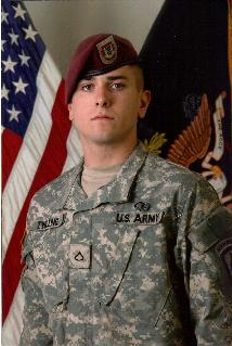 Gunnar William Zwilling was born 28-APR 1988 in Huntington Beach, California.  His parents were Kurt Zwilling and Laura Hall.  He had one brother, Alex Zwilling who served in the Air Force.  In 1993 he lived in Nashville Tennessee a few years before moving to Florissant and then to O’Fallon MO.  He enlisted in the Army when he was 17 years old after graduating from Hazelwood West High School.  His mother Laura died in November 2007.  Gunnar’s father, Kurt Zwilling is a Navy Veteran from the Vietnam era.

Corporal Gunnar Zwilling was  assigned to the 2nd Battalion, 503rd Infantry Regiment, 173rd Airborne Brigade Combat Team, Vicenza, Italy.  His unit was deployed in Afghanistan in 2008.  Troops in Afghanistan at the time worried they were understaffed as they prepared to open a new forward base in remote area.  It’s going to be a bloodbath,” he told his father, Kurt Zwilling, on the phone in what would be their last conversation. Kurt Zwilling braced himself for the worst but held out hope that his son would make it home.

Gunnar William Zwilling was killed in action 13-JUL 2008 of wounds sustained when his outpost was attacked by small-arms fire and rocket-propelled grenades from enemy forces in Wanat, Afghanistan.  He was 20.  Kurt Zwilling said his son might have foreseen his fate.  He told his father to stay strong if he should die in battle.

It was the single deadliest attack since the beginning of the war in Afghanistan. More than 200 enemy fighters swarmed a small, remote combat outpost near the village of Wanat, near the country’s porous border with Pakistan.  They brought with them machine guns, mortars and rocket-propelled grenades. The U.S. and coalition soldiers were outnumbered by at least 2 to 1.The battle was fierce. Enemy fighters fought their way onto the newly established base known as Combat Outpost Kahler.

The Americans and Afghans, numbering fewer than 100, fought back, defending their post and calling in airstrikes.  When the fighting stopped, the enemy had suffered heavy casualties, with reports of more than 100 killed or wounded.  But the Americans had suffered too. Nine U.S. soldiers were killed, and 15 others were wounded.  Apart from helicopter crashes, the bloody July 13th battle was the worst, most costly inflicted on a single U.S. battalion of any attack since the beginning of the war in Afghanistan.

The soldiers, from 2nd Battalion, 503rd Infantry Regiment, 173rd Airborne Brigade Combat Team, of Vicenza, Italy, were supposed to be coming home soon. The brigade deployed to Afghanistan in June 2007 and about 680 soldiers are already home in Vicenza, with the last of the soldiers expected home by the first week of August.

This final attack on the battalion’s C Company soldiers would make it the hardest-hit company to have served in Operation Enduring Freedom. The company lost 15 men since deploying to Afghanistan, the most for one Army company in both operations Enduring Freedom and Iraqi Freedom. In total, 24 men from the battalion were killed during this deployment.

Also killed in the attack were:

After the fierce combat that 2nd Battalion, 503rd Infantry endured in the past 15 months, several of its soldiers earned valor awards including the Silver Star, the third highest award for valor, and the Bronze Star with V device.