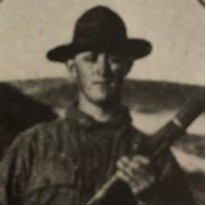 His occupation according to his draft card was a farmer in Gilmore (a small unincorporated town near Wentzville).  Arthur registered for the draft in 1917.  Arthur went overseas on 9-SEP 1918.  He died at the base hospital at Fort Riley KS on 12-OCT 1918 of influenza and pneumonia.  His parents would write, “We little thought how soon he’d be laid in a soldier’s grave.” More U.S. soldiers died from the 1918 flu than were killed in battle during the war.  Arthur is buried in St Johns United Church of Christ in Cottleville.