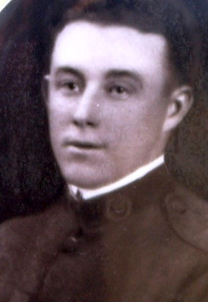 Harry was drafted in September of 1917.  Harry served in the 140th Infantry Regiment, I Battery, 129th Artillery.  The D battery of the 129th had the distinction of being commanded by then Captain Harry S. Truman.  The 140th Infantry Regiment was also known as the 6th Missouri, an infantry formation of the Missouri National Guard.  The new regiment was assigned to the 35th Division. The regiment organized and trained in the United States at Camp Doniphan, Oklahoma.  Harry departed from Brooklyn for France 25-APR 1918 on the troop ship Shropshire.  Upon arriving he was promoted to Corporal and the regiment began training under British tutelage in June 1918.

In July, the 140th had its first taste of combat in the Gerardmer sector in the Vosges Mountains, where they conducted raids on German forces. They were moved to the Saint-Mihiel sector in September where they served as a reserve for the First Army. That battle was so easy that the Reserve was never used, and the men lay in their pup tents in the soggy dripping woods, often under shellfire, without seeing the enemy.  Haferkamp was killed in action on 25-SEP 1918.  Recorded circumstance attributed to died of shrapnel wounds when his unit was came under artillery fire.

The very next day, 26-SEP 1918 the regiment participated in the Meuse-Argonne offensive which lasted until the end of the war 11-NOV 1918.  This was the largest battle the American Expeditionary Forces waged during the war.

Harry’s parents were notified by the War Department of the death of their son. according to Post Dispatch.  The newspaper reported Harry was the 8th overseas casualty from St. Charles County.  Harry A. H. Haferkamp is buried in Augusta Cemetery in Missouri.

Harry Haferkamp is honored and remembered at the St. Charles County Veterans Museum.