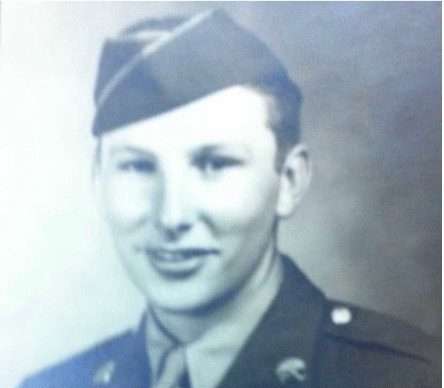 Charles gave the museum an interview in August 2018. Here is the interview, in much of Charles own words.

Charles lived in St. Charles County (St. Charles, St. Peters, O’Fallon, Lake St. Louis) his entire life.  He was 17, when he graduated from Francis Howell High School in the first week of May 1942.  After graduation, the Federal Government took over the school and boarding towns for the war efforts.

Charles registered for the draft when he turned 18 and was then drafted in the Army on December 14-DEC 1943 during World War II.  According to his draft registration card, Charles was a shipping and receiving clerk at Wagner Electric in civilian life.

Charles was at Jefferson Barracks for a couple weeks and was then shipped out to Camp Fannin in Tyler Texas for basic training.

“The most dangerous part of basic training was when they had to crawl under machine gun fire at night for about 200 feet or so and there would be a flash of red as they were shooting those tracer bullets overhead about a foot or two above them.

From there, Charles went down to Fort Benning, GA, and took some special training in electronics and Morse Code.  Then, they took a train to Camp Kilmer, New Jersey to ship out to Europe.

Charles often spoke to students in Wentzville and O’Fallon, Missouri.  The kids always want to know if he killed somebody.   Charles explained, “that is not the kind of thing that kids should hear.”  Charles finished our interview with, “You have no idea what war looks like, just no idea.”

To read Charles’ complete story, click on the pdf below.