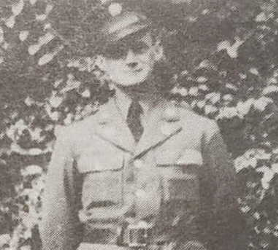 Harry Francis Engelmeyer was born 21-SEP-1908 in Josephville MO.  He was the son of Joseph Herman and Elizabeth “Lizzie” Englemeyer.  The family owned a farm in Flint Hill MO.  Harry attended St. Theodore Catholic School and listed his occupation as “farm-hand” farming with his father.

Harry was single and had no children.  Harry had one sister; Mamie and two brothers; Norbert and Edwin.  He enlisted in the Army 12-MAR-1942.  While stationed at Fort Dix, New Jersey in FEB 1944, Harry was receiving his hometown Wentzville Union Newspaper.  He once wrote the newspaper saying, “I have been receiving the Wentzville regularly and am glad to get it.  It keeps a fellow posted on what is going on back around home and also where a lot of the boys are stationed.”  He served in the US Army, 359th Infantry Regiment, Company I, 90th Infantry Division.

Harry embarked for Normandy and came ashore on Utah Beach on 6-JUL-1944; one month after the initial D-Day Invasion.  Much of the toughest fighting in the war, was yet to come.

Harry’s regiment was engaged in the battle for Mont Castre – Hill 122 – just to the east of La Haye du Puits.  Hill 122 was one of the first battles in the Normandy breakout and would prove to be a tough assignment.  The hill is just over 300 feet above sea level and was only a few kilometers south of the American lines.  The hill provided a commanding view of the terrain and the entire peninsula.  For the Americans, It was vital that the hill be taken.

The Germans had dug themselves in on Hitler’s orders to stop the American advance to the south. They called it the Mahlmann Line and it was defended by German forces belonging to the Grenadier-Regiment 943, 353 Infantry-Division and paratroopers of the Fallschirmjäger-Regiment 15 (Fallschirmjäger-Division).  The Germans from this vantage point on top of Hill 122, were able to observe and correct artillery fire to support the new East-West defensive line they installed to block the Americans.

Cherbourg had already fallen to the Americans and they now turned their attention to a southern breakthrough. On July 3rd at 05:30 the attack began with three Infantry Divisions, from east to west they were 79th and 82nd Airborne, plus the 90th starting in a line from Port Bail to Pretot. The main assault on the hill was made by 1st battalion of the 358th and two battalions of the 359th both from the 90th Division. By the evening of the 5th they had fought their way to the foot of Hill 122.

On the 6th of July fighting heat, dust, and grime as well as the withering enemy fire, the first and third battalions rushed enemy positions and took the hill.  They soon discovered they were almost entirely surrounded by the enemy who demanded their surrender. They held off the enemy until a task force of the 358th Regiment came to their assistance and helped to completely defeat the enemy defending the hill.

Harry was killed in action during this fighting on 6-JUL-1944.  It would take another four days to completely drive the Germans from the hill. On July 12th the Americans reached Plessis-Lastelle at enormous cost to both armies.  There was over 5,000 casualties in the 90th Division.

Word of his death was received by the Catholic priest in Flint Hill where the Engelmeyers lived.  The priest notified Norbert Engelmeyer, Harry’s brother.  Norbert delivered the news to his mother Lizzie who lived with her sister-in-law Mrs. Walter Bauman at 1535 Gallaher Avenue in St. Charles MO.  Harry had been in the Army for two years and five months.  He was 35 years old.  The last letter Harry’s mother received from her son was dated 28-JUN 1944.

Click on the link below to read his story.