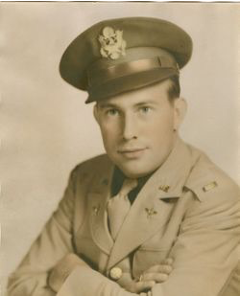 John “Jack” H. Hayes was born 13-APR 1919 in Hannibal, MO.  John’s father was William “Basil” Hays (1871-1930) and his mother was Anna L. Hayden Hays (1873-1957). Jack had four brothers; William Norbert, Joseph, Richard and Durward and seven sisters; Mary Alice, Elizabeth (Effie), Vivian, Esther, Lucella, Jermaine and Dorothy.  His father worked as a saloon keeper and later as a saloon proprietor. After prohibition started, he got a job as a taxicab driver. By 1940 Jack had completed four years of high school and was working as a shoe factory worker while living with two sisters and his mother.  We believe based on newspaper reports, Jack Hays lived in West Alton for a short time.

He enlisted in the army on 31-OCT 1940 entering the U.S. Army at Jefferson Barracks in St. Louis, MO. Hays attended the Infantry Officer Candidate School at Fort Benning, GA. and was commissioned as a Second Lieutenant of Infantry.  He served with 45th Infantry Division, 180th Infantry Regiment, 3rd Battalion, Company L, Seventh U.S. Army.  He served in the North Africa theater, Sicily, Italy and France.

Lt. Hays survived fighting in Sicily, Naples-Foggia, Anzio, and Rome-Arno.  He no doubt lost many friends – the 45th Division had more than 25,000 casualties during World War II. In August 1944, he landed in southern France and by October he was fighting in the Vosges Mountains.

Jack Hays was award a Silver Star for his actions on 1-OCT 1944.  The citation for Silver Star reads:

According to General Orders 272, HQ, 45th Infantry Division, dated 20-NOV 1944, “A Silver Star Medal is awarded to the following individual: “JOHN H HAYS INFANTRY, Second Lieutenant, Company L, 180th Infantry Regiment, for gallantry in action on 1-OCT 1944 at Fremifontaine, France. When the advance of his platoon met heavy resistance from entrenched German infantry, Second Lieutenant Hays neutralized the hostile positions with rifle grenade fire. As the enemy left their positions, Second Lieutenant Hays, at the head of his platoon, charged the retreating Germans and engaged them in close combat, personally inflicting heavy casualties on them. His gallant leadership inspired his platoon to carry out a successful attack and reflects the high traditions of the Army of the United States.

“For extraordinary heroism in action on 4-OCT 1944 in France. Approaching a farmhouse suspected of containing an enemy headquarters, Lt Hays ordered his reconnaissance patrol to take cover. He crossed a field under enemy observation and single handed attacked the house with hand grenades and rifle fire. With fearless determination he jumped through a window into a room containing eight of the enemy and after a sharp fight, destroyed or wounded two officers and captured six of their men. Moving quickly into an adjoining room, Lt Hays captured four more enemy soldiers. He continued his search of the building and with hand grenades caused the surrender of five more of the hostile force. His heroic performance resulted in the disorganization and capture of an enemy battalion headquarters and exemplifies the highest tradition of the Army of the United States.”

Within a four day period Lt. Jack Hays earned the Silver Star and the Distinguished Service Cross and sadly, a Purple Heart.

On 16-OCT, twelve days later, while his unit was still in that same general area, Lt. Jack Hays was killed in action when German forces counterattacked outside Fremifontaine.  He died in Fremifontaine, Departement des Vosges, Lorraine, France.

Jack was awarded the following medals, awards and badges:

He was buried in St. Mary’s Cemetery in Hannibal.