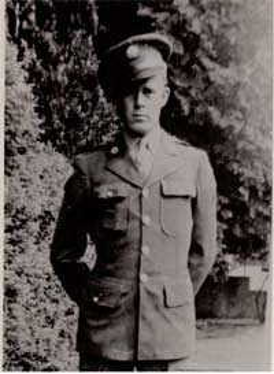 Raymond Frank Hinkel was born 29-JUL 1919 in O’Fallon MO.  His father was George Julius Hinkel (1891-1964) and his mother was Mamie “Mary Wilhelmina” Beller Hinkel (1889-1958).  Raymond had four brothers; Edwin, George, Ralph and Alfred.  He had two sisters; Evelyn and Luella.  He registered for the draft 16-OCT 1940 and later enlisted 29-SEP 1942 in the Army.  His draft card said he completed grammar school and was an construction worker.  He was a PFC serving in the 362nd Infantry Regiment, 91st Division.

The 91st Infantry Division arrived in North Africa, 18- APR to 10-MAY 1944, and trained intensively at Arzew and Renan, French Morocco.  Leaving by units, the entire Division was in Italy, 19-JUN 1944.

On 12-JUL, the Division fought as a unit near Chianni, Italy, for the high ground dominating the Arno River. By the 19th it had reached the river.  The 91st held their positions along the Arno while they underwent extensive training. On the 13th, the Division attacked the Gothic Line, took Monticelli on 18-SEP and advanced to the Santerno River through stubborn resistance, 23-SEP. Moving through rocky escarpments and other natural barriers as well as heavy opposition, the 91st occupied Livergnano, 13-OCT. The offensive was canceled and the division assumed defensive positions below Pianoro sending out patrols.

During the month of September the 91st Division fought its most brilliant campaign, in which it smashed the most formidable defensive positions in Italy, the Gothic Line. It advanced through elaborately constructed fortifications over mountainous terrain made hazardous by rain and fog, with unflinching determination and unwearying courage. According to one infantryman the climactic days, 12-22 September, were a “lifetime of mud, rain, sweat, strain, fear, courage, and prayers.” But with brilliant leadership and magnificent courage, the 91st Division cracked the Gothic Line and established itself as one of the great fighting Divisions of World War II.

From the Post-Dispatch published 21-JUL 1943.  Raymond F. Hinkel infantryman has received the Bronze Star for Meritorious Service in combat in Italy.  He is the son of George J Hinkel.

From Post-Dispatch published 18-JAN 1945.  Pfc Raymond Hinkel was busy unloading supplies for the Army in Northern Italy when he was struck by a shell fragment and killed instantly according to a letter received by his parents George J. Hinkel.  Raymond was killed in action 5-NOV 1944.

Raymond F. Hinkel came home to O’Fallon in 1946 and are interred in Assumption Catholic Cemetery in O’Fallon MO.  He was the second person in the area (from O’Fallon MO) killed in action during WW2.

Raymond Hinkel is honored and remembered at the St. Charles County Veterans Museum.