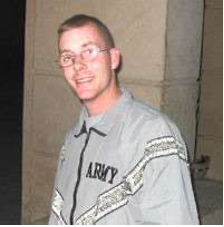 Robert Clayton Hobbs was born 23-APR 1976 in St. Charles. Robert attended Castlio Elementary School in Harvester MO. He attended Francis Howell High School. He was the son of Linda Hobkirk of St. Charles and Gary Hobbs (1951-2015). He had two brothers; Joseph and (half) Stephen and one (half) sister; Rebekah. Robert married Ann M. Galli on 21-NOV 1998 in Bell, Texas.

Staff Sgt. Robert C. “Rob” Hobbs, 29, died 3-NOV 2005 in Germany when he was struck by a civilian car on the Autobahn while tending to his disabled military vehicle on the roadside. He had served in the U. S. Army for 11 years, two in the reserves and nine on active duty, including a 15-month tour in Iraq. He was a senior supply clerk. According to Nov. 15 article in the St. Louis Post-Dispatch, citing an Army press release, “The accident occurred while he and a fellow soldier were fueling a truck on the side of the autobahn near Giessen.”

The Post-Dispatch quoted high school friend Brett Dunsford as saying that Hobbs “was setting out emergency markers when a truck driven by a civilian veered onto the shoulder and hit him. Manslaughter charges against the driver are pending in Germany.” Dunsford told the Post-Dispatch Hobbs was “hand-picked for the mission to storm the Mosul palace of Saddam Hussein’s eldest son, Uday Hussein. During that tour, he survived an attack on his vehicle and was recognized with more than 10 meritorious service awards for his bravery, commitment and expertise.”