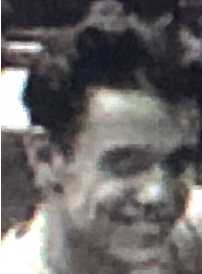 Walter attended St. Charles High School.  His senior ambition according to the 1943 yearbook was to be a “manager of a Kroger Store.”  According to his draft registration on 21-SEP 1943, Walter worked at Haussmann-Ligonier Refrigerator Company.

Walter enlisted 29-DEC 1943. He attained the rank PFC and served in the 101st Infantry Regiment 26th Division, Co L during World War II.  The division was known as the Yankee Division.

The combat action of the 101st Regiment is marked by aggressiveness.  From the beginning, the infantrymen of the regiment worked, attacked, and maneuvered with dexterity and intensity. The 26th Division relieved the 4th Armored Division on 7-OCT 1944, and the 101st Regiment began offensive operations 8-NOV 1944. They attacked the Germans near Arracourt, and the regiment’s objective was Hill 310. After a thunderous artillery barrage, the 2nd Battalion advanced on the hill and the 1st and 3rd Battalions covered the flanks by engaging Germans elsewhere.  In this action, the Regiment advanced to the town of Moyenvic and captured 524 prisoners.

On 12-NOV 3rd battalion drove off an enemy counterattack coming from Wuisse, and on 13- NOV the Regiment received 759 replacements.  With their ranks replenished, the Regiment seized Bourgaltroff, near Marimont. On 19-NOV, the regiment attacked through water waist deep on a general line north and south through Bergelstroff.  On 20-NOV the 1st Battalion captured Lohr and Innsviller and 3rd Battalion captured Torchviller.  The 3rd Battalion received the Distinguished Unit Citation for its actions from 18 to 21 NOV-1944.

The museum is looking for more information about Walter E. Hollrah.  If you can help, please contact the museum.