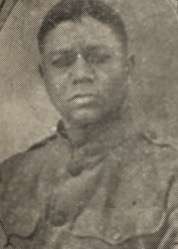 Walter Howell was born 6-APR 1886.  He lived in St. Charles MO. His parents were Peter and Neppie Howell.  He entered the service on 21-JUN 1918.  He was promoted to Corporal in June 1918.  He served in Company I, 806 Pioneer Infantry. He went overseas in August 1918.  The 806th Pioneer Infantry was a segregated unit during the war composed mainly of Black recruits from Kansas, Missouri, and other areas of the Midwest.  The Army created Pioneer Infantry Regiments and they were an essential part of the war effort. Men of Pioneer Infantry units were also a part of service units.  They primarily built bridges and roads and maintained railroads right behind the front lines.  Though they were behind the front lines, they were subject to artillery shelling and danger now the less from the enemy.

The 806th Pioneer Infantry was assigned to build an ammunition depot in the Belleville/Metz region, during the Meuse-Argonne Offensive. Walter participated in the Battle of the Argonne.  He was discharged 28-JUN 1919.

We are looking for more information about Walter.  If you can help, please contact the museum.