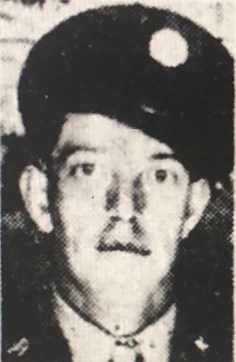 Hubert was an Army PVT in the 351st Infantry, 88th Division.  The regiment was formed from selective service personnel and sent to the Mediterranean Theater where it took part in the Italian Campaign from FEB 1944 to the close of hostilities in May 1945.  The 351st was the first all-draftee regiment to see combat in WWII.  By 10-OCT, the 351st had pushed past the 349th, and faced German flamethrowers in a battle at Gesso.

All three regiments were involved in intense fighting, and all three were beginning to lose their drive. The units were losing men faster than they could be replaced, but orders remained unchanged; the 88th Division was to keep going. There were no more reserves, but the North Apennines campaign had to continue.

Fighting not only the Germans but the treacherous terrain as well, the 88th was exhausted. In forty-four days of fighting, the 88th had lost more than 6,000 men killed, wounded, or missing. By November, there was nothing more they could do in the drive through the Apennines.  Orders came in to hold and dig in where they were. Finally the Blue Devils were going to get the rest they needed so desperately.

Daniel Wesley Hubert, was gravely wounded while in Italy on 27-DEC and later died on 28-DEC 1944.

Daniel is honored and remembered at the St. Charles County Veterans Museum on our Wall of Honor.