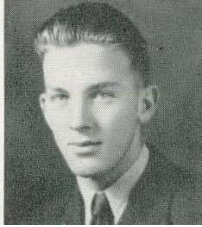 Robert L. Huff was born in 10-APR 1917. His father was Louis Tilden Huff (1896-1969) and his mother was Clara L. Huff (1898-1979). He had no siblings. He had attended college for two years, and was an electrician at America Car and Foundry. Huff was married on 16-NOV 1940 to Marietta Begley Huff from Alton IL, in Cape Girardeau MO. They had no children during their brief marriage. Robert enlisted on 9-MAR 1943 at Jefferson Barracks. He served in the Army as a Private in 273rd Field Artillery Battery C.

He died 6-APR 1943 in Camp Beale, Yuba City California. From the St Louis Star and Times 9-APR 1943: Private Robert L. Huff 25 of St Charles died Tuesday in an Army hospital at Camp Beale of a brain abscess. He was ill for only two days. He was in the Army less than a month before his death. Robert L. Huff is buried in Oak Grove Cemetery in St. Charles MO.