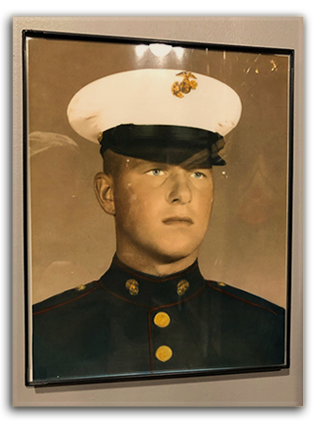 James and Judy Club exchanged over 500 letters when they were apart.  The Marines supplied James pink paper for letters.

James once cut out a newspaper article that stated “All correspondents is coming rapidly to a stop. The excitement of the discovery of some remote place, which friends used to share with one by letter, has ceased.

James underlined, People rarely write love letters any more.  They telephone instead and by doing so they are no longer blessed with those welcoming hours of learning how to examine and evaluate their feelings. Archives of families will be strangely empty except for bills and bank statements.”

James wrote on the bottom of the article, NOT OURS!

Here is part of a letter James wrote on Friday 28,  Nov 1969 while serving in Vietnam.

Dearest Judy,
I know I’ve already written you once today, but something very sad happened tonight.  One of the guys I work with just received word that his best friend, whom he came in the Corp with, is in the hospital in Da Nang critically wounded with a chest wound.  My friend is just barely 19, he’s only a kid, he blames himself for his buddy’s misfortune.  He feels like it is his doing because he talked his buddy into joining the Corps.  The poor kid was crying his eyes out.  I tried to console him but what could I say.  I think I did a little good anyway.  My friend is feeling a little better now, he found out he will be able to see his friend tomorrow.  He talked to the doctors and although his friend is in intensive care, he is doing better than at the time his parents wrote the letter.  Tonight I’m going to pray in his behalf.

Tonight I feel very selfish because in my prayers I always pray that you and I will be together soon living a happy life together.  I don’t know why, but I never thought to say a prayer for all these other Marines who make it possible for me to go to sleep each night with a sense of security.  I guess one reason is because the war seems so far away but all of a sudden it has sprung and looms above me.  I fear not for myself, but for all the other Marines who are lying in the rain tonight ever vigilant fighting someone who at many times is not seen.  Marine, it is not until this very moment that I fully understand that word.  It stands on tradition and has never failed its country yet.  If I were out in the bush tonight I know I would be scared beyond anything I have ever known yet.  I don’t think I would ever run no matter how bad things got.  I pray I will never have to find out one way or the other.  Judy, I am so proud to be in the Corps no matter in what capacity I serve because I know what we are doing is right.  I would gladly give my life if it meant we would be safe from evil that plagues this country.  I have seen very little, but I have seen enough to grow to hate anything to do with Communism.  I think I have wondered off track from what I began with.

Judy, if your mother is still going to mass and communion everyday like she said she was going to, please ask her to pray not just for me but for all the Marines for that matter all the American fighting forces.  I hope God sees fit to bring me home to you.  I am sure he will.  He has said if you believe in what you pray for, it will come to you.

Baby I love you so very much.  This experience I am going through right now I will never forget but I wouldn’t have passed it up for any amount of good times and pleasant memories.  Please bear with me during this time.  I need your strength to pull me through.  Don’t ever stop saying you love me.  I love you more than words can describe.