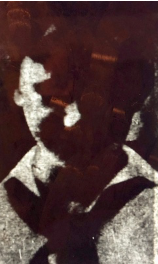 John J. Coose Jr. was born in 1922.  He lived at 620 North Eighth Street in St. Charles.  He enlisted in the Coast Guard and served during World War II.  He was a  Seaman First Class. John enlisted in the Coast Guard in October 1940.  Coose was initially reported missing and ultimately declared dead on January 30, 1942. He was nineteen years old.  The telegram to his parents stated, “killed in action in performance of his duty and in the service of his country.”  John Coose Jr. was buried at sea and is memorialized at Tablets of the Missing at Manila American Cemetery.

The St Louis Star Times and the Warrenton-Banner reported that John Coose Jr. was  the first person from St. Charles County killed in World War II.  The St. Charles City Council upon hearing the news of his death declared, a street will be named after John Coose.  The street would be in a project for 300 prefabricated home to be erected soon for war workers.  John’s parents John Coose Sr. and Mrs. Oral M. Coose formerly lived in Defiance MO. Before moving to St. Charles.

John J. Coose Jr. is honored and remembered at the St. Charles County Veterans Museum on the Wall of Honor.