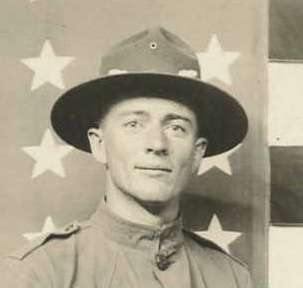 Menten, Joseph P (also shown as Menton) was born 7-DEC 1894.  He was born in and lived in Flint Hill MO.  On his draft card his occupation was listed as a farmer.  His father was Henry Fred Menten (1863-1949) and his mother was Elizabeth Tegethoff (1864-1898).  His mother Elizabeth died when Joseph was three.  He had one brother; Cosimer, and three sisters; Margaret (Maggie), Ida Mary, and  Mary Francis, Lizzie.  Joseph’s father would remarry and Joseph seven half siblings.

Joseph entered the Army on 4-OCT 1917 at the beginning of WWI. He left New York on the troop ship Aquitania with his division bounds for France on 2-APR 1918.  He was a Private in the 30th Infantry, Company D.

Joseph was in the 30th Infantry Regiment, 3rd Division.  The 3rd Division  was composed of three infantry regiments; the 7th, 15th and 30th and was called the Rock of the Marne.  The 30th Infantry Regiment repelled the German attack near Mézy, France, across the Marne River in July 1918. This defense checked the Germans’ assault and made an Allied offensive possible, thus earning 3rd Infantry Division’s nickname “Rock of the Marne.”

The Post-Dispatch reported Joseph missing on 21-AUG 1918.  His parents had received word his son was missing somewhere on the fighting line 14-AUG 1918.  Joseph Menten was reported missing and ultimately declared dead on 24-JUL 1918.  He was 25 years old.

Joseph Menten is buried or memorialized at Tablets of the Missing at Aisne-Marne American Cemetery, Belleau, France. This is an American Battle Monuments Commission location. Posthumously awarded the Purple Heart.

Joseph Menten is honored and remembered at the St. Charles County Veterans Museum.