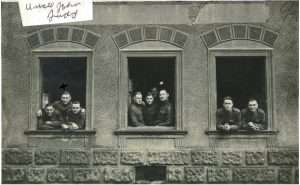 John Joseph Jud Jr. served in WW1 from 4/28/1918 to 6/11/1919.  He served in Company F, 356th Infantry Regiment, 89th Division.  Over 156,000 Missourians served in World War I, and many of them served in the 89th Division. The 89th Division, called the “Middle West Division,” formed and began its training at Camp Funston, Fort Riley, Kansas, in August 1917. Its members came from Kansas, Missouri, Arizona, Colorado, Nebraska, New Mexico, and South Dakota. In France, the Division participated in the Battle of Saint-Mihiel and the Meuse-Argonne Offensive.

For the rest of John’s story, click on the pdf below.