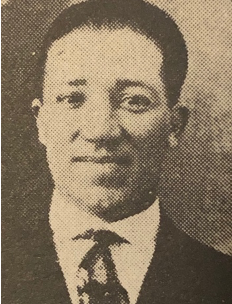 He would serve in the Marines during WWI.  Thaddeus Keene served in the 6th Regiment, 1st Battalion (1/6), 76th Company. He later transferred to the 95th Company.  The history of 1/6 is closely tied with the history of the United States Marine Corps. The Corps was a small and underappreciated force before the eruption of World War I. Its mission was limited to providing ships detachments and was considered by many as an anachronism of the days of sail. When WWI began the Marine Corps was expanded in order to support the American Expeditionary Force being sent to support the Allied Powers under General Pershing. The First Battalion Sixth Marines was formed 11-JUL 1917 and was quickly deployed to France between September and October of that year. The Battalion participated in numerous battles, but the one that is most remembered was the Battle of Belleau Wood. The conduct of the Sixth and Fifth Marines there made the Corps legendary.

Taking place in JUN-1918, the Battle of Belleau Wood was strategically important. Russia had the Bolshevik revolution and left the war, freeing fifty German divisions to move from the Eastern Front and turn against France. After years of deadlock, Germany launched their last desperate spring offensive, annihilating the British 5th Army and getting within 40 miles of Paris.  The battle lasted a month and was fought often times with bayonets. Advancing against well-emplaced German machine gun positions and suffering heavy losses, the Marines managed to push the Germans back and take their objectives.

The battle was such a hard-won success it led General Pershing to say, “The deadliest weapon in the world is a Marine and his rifle!” and that “the Battle of Belleau Wood was for the U.S. the biggest battle since Appomattox and the most considerable engagement American troops had ever had with a foreign enemy.”  In all the history of the Marine Corps there is no such battle as that one in Belleau Wood. The Marines met and defeated the best divisions that Germany could throw into the line.

Thaddeus D. Keene was wounded in 2-JUN 1918 most likely at Belleau Wood but later returned to duty 26-JUN 1918.  Thad’s Lieutenant says he was shot in the leg and was gassed in the hospital.

On 1-OCT, the Marines, along with the rest of the Second Division, marched to the front line near Somme-Py and relieved elements of a French Division. The 6th Marine Regiment led the advance for the brigade in a column of battalions on a front of approximately one mile.  The 2d Battalion led the assault with the 1st and 3d Battalions following.  During the attack, the 1st Battalion had to assault a strongly organized German machine gun nest, called the “Essen Hook,” in the French sector, which the Marines captured and turned over to the French.

On 4-OCT the 5th Marine Regiment passed through the 6th Marine Regiment to continue the attack.  The advancing Marines were subjected to extremely severe casualties as a result of flanking machine gun and harassing artillery fire; over 1,100 Marines were casualties that day.  Early the next morning, the 6th Marines passed through the lines held by the 5th Marines and continued the attack.  Finally, on the morning of the 6-OCT, the 1st Battalion, 6th Marines captured the ridge.

By this time, the Second Division had again expended its utmost effort and was overdue for relief, but the 1st Battalion, 6th Marines was now assigned the task of capturing St. Etienne.  On 8 OCT, its 76th Company (Thaddeus Keene’s Co.) succeeded in taking the town, and despite reduced numbers, managed to hold this advanced position during a German counterattack that night.

We believe it was during this battle Thaddeus Keane was severely wounded and died later in the Evacuation Hospital #2 on 8-OCT 1918.  He was buried in Severs Cemetery Ronen France.  He would be brought home and reburied at Ebenezer Cemetery in West Alton MO alongside his parents.  He was 31.

For their actions at Belleau Wood, Soissons, and Blanc Mont, the 6th Marine Regiment was awarded the French Croix de Guerre three times.