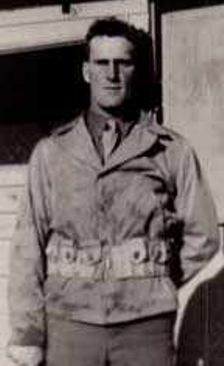 Kleeschulte, Clemons (Clem or “Bud”) Aloysius was born 29-MAR 1917 in Josephville Missouri His father was Clemens Alphonse Kleeschulte (1888-1976) and his mother was Mary Aurelia Stahlschmidt Kleeschulte (1891-1955) of O’Fallon MO.  Clem was employed by Milford Lamberson in O’Fallon MO. He had four brothers; Elmer, Albert, Edward, and Lawrence.  He had nine sisters; Constantine, Edna, Viola, Norma, Florence, Dartha, Lillian, and Della.

His remains are interred in a military cemetery in Epinal, France. He was the first person in the area killed in action during WW2.

The members of VFW Post 5077 in O’Fallon MO selected the name of Hinkel-Kleeschulte-Westhoff as the name of the veteran organization. Members selected this name to honor Private First Class Peter Westhoff, the first Soldier killed in action from our area during World War I; as well as Private First Class Raymond Hinkel and Corporal Clemens A. Kleeschulte, who were the first area Soldiers killed in action in World War II.