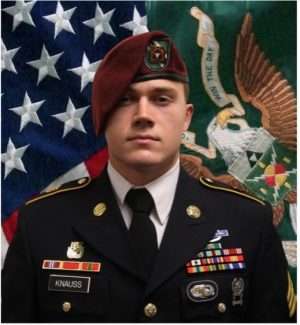 Army Staff Sgt. Ryan C. Knauss was born 7-APR 1998 in Corryton, Knox County, Tennessee.  His mother was Paula Knauss and his father was Greg Knauss.  He had one brother: Tyler.

Ryan was a graduate of Gibbs High School in Corryton, near Knoxville.  He joined the Army service in May 2016 and served as a Scout in the 82nd Airborne Division.  He also served as a psychological operations NCO in the 9th Psychological Operations Battalion.

Ryan Knauss was a member of Company B, 9th Battalion, 8th Psychological Operations Group (Airborne), at Fort Bragg, North Carolina.  Ryan was on his second deployment to Afghanistan.  He had previously deployed to Afghanistan in 2017.

He died of his wounds after a suicide bomber detonated explosives outside Kabul’s Hamid Karzai International Airport Kabul, Afghanistan 26-AUG 2021.  He was 23.  Staff Sgt. Ryan Knauss was the sole Army soldier killed by the suicide bombing.  The other twelve killed belonged to the Marine Corps and Navy.  Ryan, like many of the other casualties, had only been in the country for a week before his death.

Ryan left a young wife behind.  Alena said she and Ryan were high school sweethearts.  Ryan graduated from Gibbs, and she attended a rival school. The pair met when they worked together at a Fountain City Pizza Parlor when she was 15 years old.

He is buried in Arlington National Cemetery in Virginia.