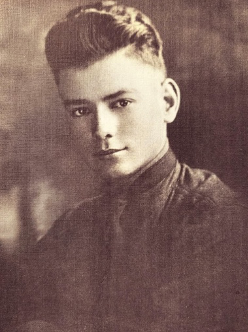 After enlisting, on 1-MAY 1917, Edward Kohl departed New York on 3-MAY 1918 on troop ship Missanabie. He served in the 138th Infantry regiment, 35th Division.  He was in the battles of Vosges Sector, St. Mihiel Reserve, Argonne.  In the Battle of the Meuse-Argonne, the regiment led the division on the first day of the attack on 26-SEP 1918. Fighting through fog, enfilade fire from their left flank, and under constant artillery barrages, the regiment toiled through an exposed sector, German machine gun nests, and sniper fire to complete its objective on Vauquois Hill. The regiment fought alongside Colonel George S. Patton’s tank brigade to capture the villages of Cheppy and Exermont.  He was killed in action at the Battle of the Argonne Forest 29-SEP 1918. He was 18 years old.

Edward G. Kohl is honored and remembered at the St. Charles County Veterans Museum.  If you have additional information about Edward, please contact the museum.