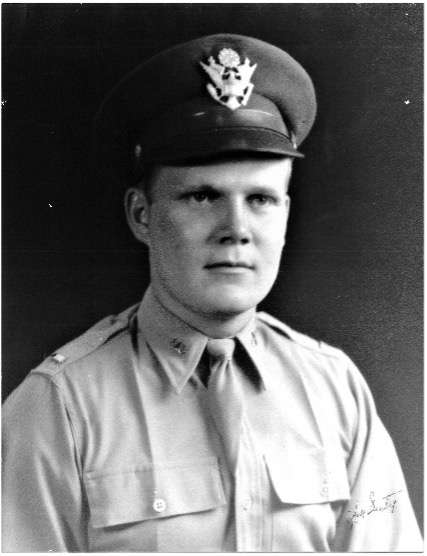 Merlin De Vere “Pat” Larson was born 3-JAN 1916 in Swea City, Iowa.  His father was Paul W. Larson (1886-1955), and his mother was Ida Edalaine Anderson (1890–1982).  Merlin was a second generation American and an only child.  Merlin attended Swea City High School and after graduation entered Iowa State College in Ames majoring in Forestry.  Merlin earned his bachelor’s in forestry in 1938 and then took a job with Iowa Geodetic Survey as a project supervisor in Blackhawk County.  Later in 1939, he was employed by the Curtis Mill Works in in Clinton Iowa.  Merlin was transferred briefly to New York in 1940 and later Memphis Tennessee in a sales position with Curtis. Merlin enlisted 11-JUL 1941 at Fort Des Moines, Iowa.  He was sent to California for flight training but unfortunately washed out as a pilot.  From 1941-1945, about forty percent of cadets were lost due to accidents, academic or physical problems, and other causes.

After pilot training, his Military Occupational Specialty (MOS 4822) became Armament and Chemical Officer.  He graduated from Armament and Gunnery School at Lowry Field in Denver Colorado as a 2nd Lieutenant in March 1942 and was assigned to the 93rd Bomb Group (Heavy) which had been activated at Barksdale Field Louisiana on 1-MAR 1942.  Heavy bombers were bomber aircraft capable of delivering the largest payload of air-to-ground weaponry (usually bombs) and longest range (takeoff to landing).  In World War II, the “Heavies” were the B-17 Flying Fortress, B-24 Liberator, and B-29 Superfortress.

After additional training at Barksdale and Fort Meyers Florida, Merlin left for England on 31-AUG 1942 arriving on 5-SEP 1942.  The squadron was attached to the 8th Air Force.  Merlin was appointed Squadron 409th Armament and Gunnery Officer.  The squadron entered combat in October 1942.

For the rest of Merlin’s story, click on the link below.