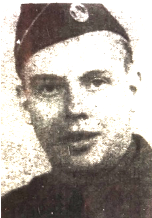 Leon H. Mades was born in Defiance Missouri 14-SEP 1919.  Leon’s parents were William M. Mades and Adele Leimkuehler Mades.  Leon attended the public school at Hamburg (a former town in Weldon Springs). He received religious instruction at the Evangelical Church of Defiance and completed the Rite of Confirmation on April 9, 1932. He then moved with his parents to Treloar Missouri (an unincorporated township west of O’Fallon) in Warren County. He attended Hopewell High graduating 20-MAY 1937.

Leon was the first young man from the Holstein Church and the Treloar community to be inducted into the Army during World War II.  He went to Jefferson Barracks and enlisted 13-JUN 1941. After training at Fort Leonard Wood, he was transferred to California for specialized training in June 1943.  He entered the Pacific theater by way of Hawaii, then to New Guinea and finally the Philippines. Leon was a TEC4 or Sergeant in the 1st Infantry Regiment, Company B.

Control of the Philippine islands was vital to the Japanese.  Loss of the Philippines would threaten Japan’s overseas access to critical raw materials, especially oil, from the East Indies and Southeast Asia. Four U.S. Army divisions and MacArthur landed on Luzon 9-JAN 1945 and began their push toward Manila. Ultimately, 10 U.S. divisions and five independent regiments fought on Luzon, making it the largest campaign of the Pacific war. On the morning of the 17-MAR 1945, Company B advanced to the crest of a hill in the Antipolo Wawa Mountain Range East of Bayanbayanan, in Rizal Province on Luzon, Philippine Islands.

“My Dear Mrs. Mades, Prior to the arrival of this letter you will, no doubt, have been notified by the WAR Department of the death of your beloved son, Leon. I fully realize that mere words cannot compensate for the great loss you have sustained, yet I hope you will not deem this an intrusion on your bereavement.  Accomplishing this mission assigned to them (our company) in the afternoon, they began to dig in for the night. Your son had prepared the evening meal at the kitchen, a short distance behind the front lines and took it up to the men. As the meal was being served, the enemy delivered a fierce mortar and artillery barrage on our positions. Leon was killed instantly by the shrapnel. During the three years and more that Leon has been a member of this Company, first as cook and later as our Mess Sergeant, he has given to and received the full cooperation of all men he came in contact with. Not only has he been doing his duties in a noble manner; Though inconveniences and hardships have been many, he has not complained but has always had the welfare of his friends at heart. His fine personality won for him the deep respect and admiration not only of all men in the Company but throughout the entire Regiment. I am sure it will console you to know that Leon lived a sound life while in the service and upheld the highest and most noblest traditions of the Military Service.  We share with you in some part the grief that I am sure you must feel and on behalf of the Officers and men of Company “B” and his many other friends we wish to take this means of extending to you their deepest and most heartful sympathy.”

Sgt. Leon H. Mades was killed in action on 17-MAR 1945.  During the Battle of Luzon, U.S. troops liberated thousands of Allied prisoners of war who had been in captivity since the 1942 Japanese invasion and the infamous Bataan Death March.  By mid-March, Manila officially returned to Allied control.

He was buried with full military honors and the Chaplain conducted the religious services of his faith at his grave, in the United States Armed Forces Cemetery No. 1 at Manila, Luzon, Philippine Islands.

The Marthasville Record reported on 1 June 1945:

Memorial Services Held Sunday for while performing the task assigned him, resulting in instant death.  His body was laid to rest with full military honors, and the chaplain conducted the religious service of his faith at the grave in the United States Armed Forces Cemetery Number 1, at Manila. His superior officer gives him this testimony:” Leon lived a sound life while in the service and upheld the highest and most noblest traditions of the military service.”  He attained the age of 25 years, 6 months, and 3 days.  He leaves to mourn his untimely death his bereaved parents, three brothers and one sister: SSgt. Ray Mades, stationed in Panama, Vera Paul and Norman, a sister-in-law, a niece Beverly Kay Mades, five uncles, 6 aunts, other relatives and a host of friends. Memorial services were held in Immanuel Evangelical and Reformed Church Holstein, on Sunday afternoon May 27, 1945, which were largely attended. This was followed by a short memorial service by the Daniel Boone American Legion Post Number 180.

The pastor, J.N. Schuch, conducted the service. The sermon was based on the Scripture passage, Psalm 119, 49-50. He said in part: “Those young men who are representing us at the battlefront and are there enduring suffering and dying are setting us a lofty example, they are demonstrating to a materialistic world that there are things higher and more important than life itself, high and noble principles for which men may lay down their lives, Jesus said, “Greater love has no man then that a man lay down his life for his friends.” These who have laid down their life as a sacrifice upon the alter of their country must be numbered with the heroes of the past who fought so valiantly and died so bravely in order that others may have the more abundant life.

“Their sacrifice is a challenge to us that we prove ourselves worthy of their sweat, pain and death. We dare not fail them. The price must not be paid in vain.

“But even though we realize that Leon died as a gallant soldier, who defended with his life the freedom of his country, his untimely death brings sorrow and heartache and we ask: “To whom shall we go for light and comfort and hope?” The psalmist points the way when he says “Thy word is my comfort in my affliction and my hope. The Lord is our refuge and a very present help in the day of trouble. Therefore we will lift up our eyes to the hills from whence our help cometh. Our help comes from the Lord who made heaven and earth.’ He invites us in the day of sorrow, affliction and bereavement; come unto me and I will give you rest.”

The many friends of the bereaved family join in the hope expressed by Leon’s chaplain when he writes:” It is sincere hope that our Lord will sustain you in the loss you have suffered and will give you strength and encouragement in the difficult days which lie ahead.”