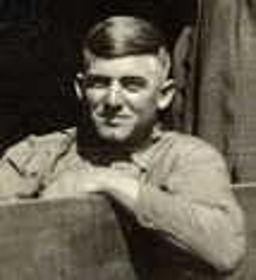 Fred “Fritz” Henry Lindwedel, Jr. was born 7-OCT 1890 in Kimmswick MO.  He later moved to St. Charles MO.  His father was Frederick “Fritz” Lindwedel (1862-1936) and mother was Henriette Maria Mary Catherina Dornseif (1865-1901).  He had four brothers; Otto, Henry, Herman, and Edward.  He had four sisters; Carolena, Emma, Louise, and Magdalen.  Fred lived at 1525 Clay Street and his occupation was clerk.

Private First Class Frederick H. Lindwedel Jr. departed New York for France on the troop ship Leicestershire on 14-JUN 1918.  He served in the 138th Infantry, 35th Division, Company I.  During World War I, the 138th Infantry Regiment first took over operations in the Vosges Mountains in southern France and drew first blood for the 35th Infantry Division during a trench raid at Hilsenfirst. The regiment later took part in the Battle of St. Mihiel. In the Battle of the Meuse-Argonne, the regiment led the division on the first day of the attack on 26-SEP 1918.

Fighting through fog, enfilade fire from their left flank, sniper fire, machine gun nests and constant artillery barrages, the regiment trudged through an exposed sector to complete its objective on Vauquois Hill.  The regiment fought alongside Colonel George S. Patton’s tank brigade to capture the villages of Cheppy and Exermont.

The Meuse–Argonne offensive was a major part of the final Allied offensive of World War I that stretched along the entire Western Front.  It was fought from 26-SEP 1918, until the Armistice of 11-NOV 1918, a total of 47 days. The Meuse–Argonne offensive was the largest in United States military history, involving 1.2 million American soldiers. It is the second deadliest battle in American history, resulting in over 350,000 casualties including 28,000 German lives, 26,277 American lives and an unknown number of French lives.  U.S. losses were worsened by the inexperience of many of the troops, the tactics used during the early phases of the operation and the widespread onset of the global influenza outbreak called the “Spanish flu”.

Frederick was severely wounded in the Meuse-Argonne Offensive.  The Armistice began on 11-NOV 1918 at 11:00 AM.  Frederick lingered in the hospital and died 24-NOV 1918 from his wounds complicated by the Spanish Flu.  Frederick is buried in Jefferson Barracks National Cemetery in St. Louis.