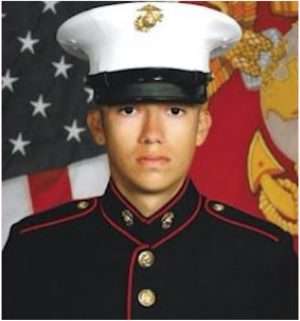 Cpl. Hunter Lopez was born 15 Jan 1999 in Palm Springs and grew up in Indio California.  His parents were Herman and Alicia.  Both of Hunter’s parent served in law enforcement.  Hunter had one sister: Trinity and one brother: Owen.  He graduated from La Quinta High School in 2017. Before joining the Marine Corps, he served as a Riverside County Sheriff’s Department Explorer Scout from 2014-2017, where he obtained the rank of Captain.

As soon as he was able to, he started talking to a recruiter. He traveled down to the recruiting office in Palm Desert and talked to a recruiter about the opportunities the military would provide.”

Hunter arrived in Afghanistan in the final days of America’s decades-long war there. In his last phone call with his parents, he described the chaos in helping people evacuate.

Hunter was most recently a member of 2nd Battalion, 1st Marine Division, Golf Company, 1st Platoon, 3rd squad. Hunter once told family members a story about a little boy who had been separated from his family. Hunter carried that boy for miles to get him to safety. They also learned from Hunter’s fellow Marines that just moments before the deadly explosion at the Kabul Airport, he saved two young girls who were being crushed by the panicked crowd.  He pulled one out, handed to his friend, and he took her on the side and gave her water, came back for the other one. Hunter told him “I’m gonna (sic) go back.”  A few seconds later the blast happened.

Hunter was likely awarded the following medals and ribbons:

Hunter is buried in Riverside National Cemetery in California.