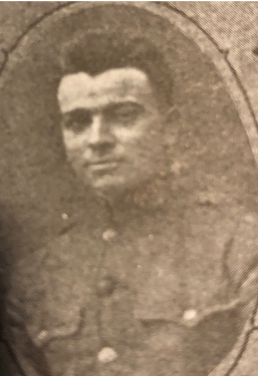 Louis Frederick William Siedentop was born 10-DEC 1892 in Weldon Springs. His father was Conrad and mother was Fredricka Wessler Siedentop.  His occupation was a self-employed farmer in Weldon Springs.  He had two brothers; Carl and Waldo and two sisters; Sophie and Hilda.  He did his basic training at Camp Funston Kansas (now Fort Riley).  Louis departed from Hoboken New Jersey on troop ship Agamemnon for France on 7-APR 1918.  Louis was a PVT and served in Company I 7th Infantry Regiment, 3rd Division.  The regiment has served in more campaigns than any other infantry unit in the United States Army.

The regiment is known as “The Cottonbalers” for its actions during the Battle of New Orleans, while under the command of Andrew Jackson, when soldiers of the 7th Infantry Regiment held positions behind a breastwork of cotton bales during the British attack.  In World War I, the unit is credited with participation in the Aisne Defensive, the battle of Château-Thierry, the defense of the Champagne-Marne region and the attacks at Aisne-Marne, Meuse-Argonne, and Saint-Mihiel.

Louis Siedentop was killed in action on 15-JUL 1918 during the Second Battle of the Marne.  He was 25.  Louis is buried at Emmanuel United Church of Christ Cemetery in Weldon Springs.  He was posthumously awarded the Purple Heart and Victory Medal.

Louis Seidentop is honored and remembered at the St. Charles County Veterans Museum.