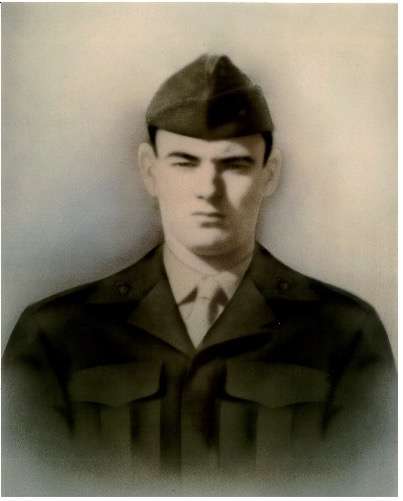 Lucian enlisted in the Marine Corps on 29-SEP 1951.  He had the rank of Private First Class. Lucian served with 5th Marines, 1st Marine Division, 2nd Battalion Company F.  We believe Lucian served briefly in the military in Missouri living in St. Charles County.  He lists Mrs. Ludie E. Schamma of O’Fallon, his sister as a contact.

He Served during the Korean War. Prior to Lucian’s arrival in Korea, the 5th Marines participated in the battle of Pusan, Inchon, the liberation of Seoul, the Chosin Reservoir Campaign, and the defense of the East Central and Western Fronts.  The 2/5 is the most highly decorated battalion in the Marine Corps and their motto, “Retreat, Hell!” comes from the French trenches of World War I, when a Marine officer named Lloyd W. Williams was advised by a French officer to retreat and replied, “Retreat? Hell, we just got here!”

The winter of 1951–52 found the 1st Marine Division deployed along an 11-mile front just north of the Punchbowl. In mid-March, the division was reassigned from the X Corps’ eastern position in Korea, to the I Corps area at the far western end of the U.N. line. In March, the division assumed responsibility for approximately 35 miles of the front, which overlooked Panmunjom and included the defense of the Pyongyang–Seoul corridor. The pace of the war slowed, with small, localized actions replacing the earlier, large-scale offensives.  Korea was still a dangerous place.  The fighting while not widespread, was just as deadly.

Lucian was killed in action on 25-JUN 1952, in North Korea.  He was 18 years old.  He is buried in RichlandNorth Carolina in Whaley Cemetery.  Lucian is remembered at the Korean War Veterans Memorial in Washington.

Today, 7,674 Americans remain unaccounted for from the Korean War.

We are looking for more information including a picture of Lucian.  Please contact the museum if you can help.