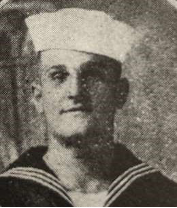 Conrad A. Lutz was born on 3-April 1893.  He lived in Flint Hill MO.  His parents were Albert Lutz (1858-1919) and mother was Elizabeth “Lizzie” Schaber Lutz (1861-1940).  He had three brothers; Elmer, Romanus and Earl.  He had one sister; Walburga.  His occupation was blacksmith.  His basic training was at Great Lakes Naval Training Center.  He was a Mechanics Mate.  Conrad was in Quebec Canada, ready to sail overseas, when he was taken ill at the station.  He died on 20-September 1918 in

Quebec.  His death was reported as being caused by Spanish influenza and pneumonia.  His body arrived in Wentzville on Thursday and funeral services will be held in Flint Hill Friday afternoon.  Conrad is was buried in Flint Hill Cemetery.