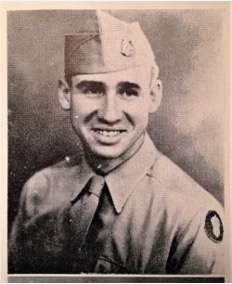 Theodore W. MacGruder was born 28-SEP 1925.  His father was Alva Bryan Magruder (1896–1972) and his mother was Elizabeth M Robertson Magruder (1897–1997).  He lived in Lincoln Missouri and attended Buchanan High School in Troy MO where he was vice president of the FFA.  After high school he enrolled at the University of Missouri. Theodore enlisted on 20-DEC 1943 at Jefferson Barracks, MO.  He served in the 87th Infantry Division, 346 Infantry Regiment.  During the Battle of the Bulge, the 87th fought with reduced strength, under severe weather conditions with snow, fog, lack of shelter and limitations on the use of artillery fire. The enemy had an advantage with shelter and camouflage for equipment and men in the towns of St. Hubert, Moircy, Pironpre, Remagne and Tillet. Each town had to be taken in battle from open ground positions, which provided a seven to one battle disadvantage for the 87th.  Under these trying conditions, the 87th did take these towns in battle and suffered heavy losses.

Sgt. Theodore MacGruder was killed in action 20-DEC 1944 in France.  He is buried at Jefferson Barracks National Cemetery in St. Louis, MO.  He also has a memorial marker at the New Salem Cemetery in Lincoln County, MO.Mac