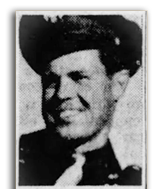 Marion joined the Army Air Corp in AUG 1940 and served as a Flight Officer and co-pilot on a B-25C in the 70th Bomber Squadron, 42nd Bomber Group (Medium Bombers).  In early June the group moved to Guadalcanal where it entered combat. During 1943 it operated over the central Solomon Islands attacking Japanese airfields, bases, gun positions and shipping. It took a heavy toll of Japanese ships attempting to pass along the Slot in an effort to get reinforcements to the Japanese troops on Guadalcanal. By the end of August 1943 the group had sunk or damaged beyond repairs seventeen barges. During this period the group used staging bases to extend its range. On 12-JAN 1944 they attacked Simpson Harbour on Rabaul, using Treasury Island as a staging post for the first time (this was the group’s first attack on Rabaul). During the month they flew 180 sorties against Rabaul.

During these sorties, Marion O. Stephens was reported killed in action.  Flight Officer Stephens was initially reported as missing in action on 11-FEB 1944 along with the rest of his crew. The administrative date of death was set at 17-JAN 1946. Following the war his aircraft was located, crew recovered and identified with a revised date of death as 28-JAN 1944; the date they were initially reported missing.

Marion O. Stephens’ interment date at Jefferson Barracks was 19-OCT 1959.  The crew is buried as a group in Jefferson Barracks National Cemetery, St. Louis, MO. His name is permanently engraved on the Walls of the Missing at Manila American Cemetery and Memorial.

Marion is honored and remembered at the St. Charles County Veterans Museum.