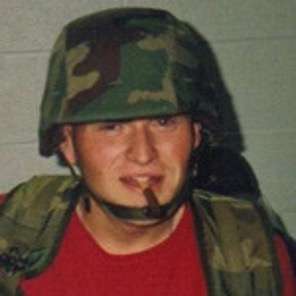 James’ mother Karen said, “He thought about it for many years.  His father, James H. Martin Sr. served in the Korean War and his grandfather (Robert B Pentecost of E. St. Louis), and an uncle died in service in World War II.”   She continued, “I didn’t want him to go in, but I wasn’t surprised.  Our family has paid more than its share.”  Of her only son, Karen Martin says simply: “He was perfect.”

James was assigned to A Company, 2nd Battalion, 14th Infantry, 10th Mountain Division (Light Infantry). Radio operator with the unit. Members of the company, part of the Quick Reaction Force in Somalia, had been sent to rescue Rangers exchanging fire with Somalis in the streets of Mogadishu on October 3rd. James Martin was killed when the company’s convoy was ambushed.

James and Lori were newlyweds.  When Lori was asked about her husband’s final mission and the dangers he faced in Somalia, Lori said, “If it meant saving someone’s life, he would do it. That’s the kind of person he was.”

James Henry Martin died on 4-OCT 1993, in in Mogadishu, Banaadir, Somalia.  He was 23.  He is buried in Lakeview Memorial Gardens in Fairview Heights, Illinois

The other soldiers killed that day:

Pilots and Crew of the 160th Special Operations Aviation Regiment