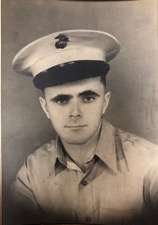 Richard enlisted in the U.S. Marine Corps, 30-OCT 1939. He completed basic training at Recruit Depot, San Diego, California.  Following a short assignment in Bremerton, Washington, and Mare Island, California, he was mustered on 7-MAR 1940, aboard ammunition and supply ship USS Pyro (AE-1).  The following year, Pyro was moored at West Loch in Pearl Harbor when the Japanese attacked 7-DEC 1941. She suffered no serious damage and was credited with damaging one Japanese plane.

The Battle of Corregidor was fought May 5–6, 1942, was the culmination of the Japanese campaign for the conquest of the Commonwealth of the Philippines during World War II.

From 29-DEC to the end of APR-1942, despite incessant Japanese aerial, naval and artillery bombardment, the garrison on Corregidor, 4th Marine Regiment and units from the Army the Navy and locally recruited Filipino soldiers, resisted valiantly, inflicting heavy enemy losses in men and aircraft.

On the night of 4-MAY a submarine returning to Australia from patrol evacuated 25 people. Among the passengers were Colonel Constant Irwin, who carried a complete roster of all Army, Navy, and Marine personnel still alive.  Included in the cargo sent from Corregidor were several bags of mail, the last to go out of the Philippines.  The last letters, many men would write their loved ones.

On 5-MAY, Japanese forces boarded landing craft and barges and headed for the final assault on Corregidor. The last reserves were committed consisting of about 500 Marines, a few sailors, and the soldiers of the 4th Battalion. These reinforcement tried to join the battle as quickly as possible, but Japanese snipers had slipped behind the front lines and any movement was very costly. To make matters worse, another 880 Japanese reinforcements arrived. The 4th Marines held their positions, but the Americans were losing ground.

The defenders’ final blow came when three Japanese tanks were landed and immediately went into action. The men of Denver Battery withdrew to the ruins of a concrete trench a few yards from the entrance to Malinta tunnel. At the same moment, Japanese artillery delivered a heavy barrage. Aware of the consequences if the Japanese captured the tunnel, where about 1,000 helpless wounded men lay, and realizing the Malinta tunnel could not hold out much longer, General Jonathon Wainright knew that more Japanese would be landed at night. He decided to sacrifice one more day of freedom in exchange for several thousand lives.

In a radio message to President Franklin Roosevelt, Wainwright said, “There is a limit of human endurance, and that point has long been passed.” Colonel Howard burned the 4th Marine Regiment’s flag as well as the national colors to prevent their capture. Wainwright surrendered the Corregidor garrison on 6-MAY 1942.

About 4,000 of the 11,000 American and Filipino prisoners of war from Corregidor were marched through the streets of Manila to incarceration at POW camps. US Army and Navy nurses, the “Angels of Bataan and Corregidor” continued to work on Corregidor for several weeks.  Over the course of the war, thousands were shipped to the Japanese home islands as slave labor. While most of the Allied forces on Corregidor surrendered, many individuals continued fighting as guerrillas.

Reported as missing in Post-Dispatch 1-JUN 1942.  Private First-Class Richard Bruce Maxson USMC was captured by the Japanese after the fall of Corregidor on 6-MAY 1942 and was held as a prisoner of war until his death in captivity.  Home was St. Charles MO.  His body not recovered.

On 21-OCT 1942 it was reported: “Individual has been reported through sources considered official…died as Prisoner of War…Philippines Unstated Philippines 14-121, Camp #10, Lipa, Batangas, Philippines]. Detaining country: Japan.”

Headquarters of the U.S. Marine Corps, Commandant’s Office in Washington.

I have learned through the International Red Cross that your son, Private First Class Richard B. Maxson, U.S. Marine Corps, has died in a Japanese prison camp.  I wish to express my sympathy to you and the members of your family in your great loss.

Nothing I might say can tend to minimize your loss nor alleviate your sorrow.  However, I am sure you will in some measure be comforted by the knowledge that your son served his county faithfully and that his friends share your sorrow.

Richard’s letters he wrote home to his mother are now included in this story.  Click on the pdf below. 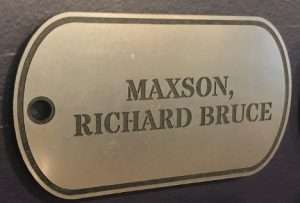