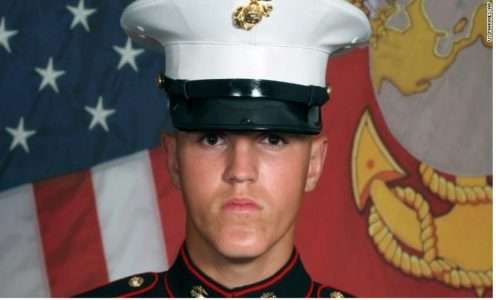 Lance Cpl. Rylee J. McCollum was born 26-FEB 2001 in Riverton.  His father was James McCollum and his maternal mother was Kathy Plummer.  His early years were spent in Dubois.  At the age of 6, Rylee moved to Jackson Wyoming with his father, Jim, and his sisters, Cheyenne, Stephenie and Roice.  He attended Jackson Hole High School, where he competed as a wrestler, and was a 2019 graduate of Summit Innovations School in Jackson.

On Rylee’s 18th birthday he made that choice, to offer his service to the country.  Family members say becoming a Marine was a life-long goal for him.  He joined the Marines.  He graduated Marine Corps Boot Camp at Camp Pendleton, on 6-DEC 2019.  While he was at boot camp he met “Gigi” the woman who would become his wife.  His sister said, “He dreamed of one day becoming an American history teacher and a wrestling coach, passing down the same passions he picked up as a kid in Jackson.”

Shortly after his Marine Corps graduation Rylee and Gigi married on Valentine’s Day 2021 and were expecting a baby 22-SEP 2021. Rylee was excited to become a father.  His family expected that he would be home just in time to meet his new baby.  The newlyweds wanted the baby’s gender to be a surprise.

Lance Corporal Rylee McCollum deployed to Jordan in April of 2021, with the 2nd Battalion, 1st Marines.  His battalion’s deployment to the Middle East as part of the Special Purpose–Marine Air-Ground Task Force–Crisis Response–Central Command was his first deployment.

He deployed to Afghanistan and died after a suicide bomber detonated explosives outside Kabul’s Hamid Karzai International Airport Kabul, Afghanistan. 26-AUG 2021. He was 20.