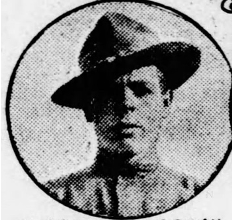 Charles departed from NY on the Troopship Leicestershire 3-MAY 1918 for France.  He was a private in the 138th Infantry Regiment, 35th Division. The 138th would fight in the Battle of the Meuse-Argonne.  His regiment led the division on the first day of the attack on 26-SEP 1918. Fighting through fog, enfilade fire from their left flank, and under constant artillery barrages, the regiment toiled through an exposed sector, German machine gun nests, and sniper fire to complete its objective on Vauquois Hill. The regiment fought alongside Colonel George S. Patton’s tank brigade to capture the villages of Cheppy and Exermont.

It was during this action on 26-SEP 1918, Charles McGowan was killed in action.

Charles T. McGowan is buried at Plot H Row 30 Grave 26, Meuse-Argonne American Cemetery, Romagne, France. This is an American Battle Monuments Commission location.  He was 19 when he was killed in action.

The Meuse-Argonne offensive lasted until the end of the war 11-NOV 1918.  This was the largest battle the American Expeditionary Forces waged during the war.