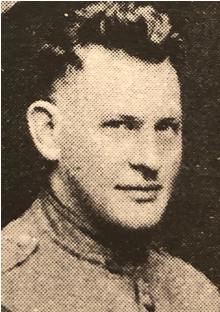 Frederick W. Mintert was born in West Alton 11-AUG 1891 in St. Charles County, MO.  His mother was Maria Anna Elisabeth Mintert (1856-1904) and father was Frederick Mintert (1850-1892). Frederick had four sisters; Anna, Elisabeth, Gertrude and Mary.  Frederick lived on Missouri Point in St Charles county south of the town of West Alton on the farm with his sisters.

Frederick Mintert joined the Army and served during World War I. He served with Headquarters Company, 354th Infantry Regiment with the 89th Division.  Over 156,000 Missourians served in World War I, and many of them served in either the 35th or 89th Divisions. The 89th Division, called the “Middle West Division,” was formed and officially activated in August 1917 under the command of Major General Leonard Wood. training at Camp Funston, Fort Riley, Kansas, in August 1917. Its members came from Kansas, Missouri, Arizona, Colorado, Nebraska, New Mexico, and South Dakota. In France, the Division participated in the Battle of Saint-Mihiel and the Meuse-Argonne Offensive.

The Meuse–Argonne offensive was a major part of the final Allied offensive of World War I that stretched along the entire Western Front. It was fought from September 26, 1918, until the Armistice of November 11, 1918, a total of 47 days. The Meuse–Argonne offensive was the largest in United States military history, involving 1.2 million American soldiers. It is the second deadliest battle in American history, resulting in over 350,000 casualties including 28,000 German lives, 26,277 American lives and an unknown number of French lives. U.S. losses were worsened by the inexperience of many of the troops, the tactics used during the early phases of the operation and the widespread onset of the global influenza outbreak called the “Spanish flu”.