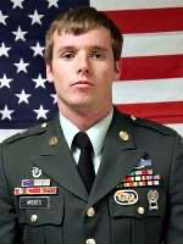 Moses, Frederic N. was born 6-MAY 1985 in St Charles MO, the son of Fred J. Moses and Jeanie M. Moses. He had two sisters; Lara and Elizabeth, and two brothers; Daniel and Paul. Frederic N. Moses died 15-MAR 2012. He was a Green Beret and his rank was SFC.

Nick graduated from Duchesne High School in St. Charles, Missouri in 2003, and enlisted in the United States Army on 01 June 2004 as an 18X. He attended basic and advanced individual training at Fort Benning, Georgia. Upon completion of the Special Forces Qualification Course in 2006, he was assigned to 3rd Battalion, 5th Special Forces Group (Airborne) at Fort Campbell, Kentucky as a Special Forces Communications Sergeant. He deployed with the Battalion Signal Detachment to Taji, Iraq from October 2007 to May 2008 in support of Operation IRAQI FREEDOM V. He went on to join Special Forces Operational Detachment – Alpha 5326, and deployed with them to Baqubah, Iraq from January through July 2009 in support of Operation IRAQI FREEDOM VI and conducted a Joint Combined Exchange Training (JCET) exercise to Jordan from January through March 2010. SFC Moses then deployed to Baqubah, Iraq from August 2010 through March 2011 in support of Operation NEW DAWN. Following a short training cycle, he returned to Jordan for a second JCET exercise from October through November 2011.

According to an article in the Post-Dispatch dated 2-SEP 2013, Moses was shot by another soldier. The shooter said “that he thought there was an intruder in his house” though Nick was his friend and a guest in his home at the time.

The shooter was charged with 2nd degree murder for the death of Moses and two counts of attempted first-degree murder for shooting at the police. But a jury found him not guilty of those charges. They did, however, find him guilty of the far lesser charges of reckless homicide and reckless endangerment. The maximum penalty he would face is four years in prison. He was later released for time served (one year) while awaiting trial.

The circumstances of the shooting are contested.

Frederic N. Moses died 15-MAR 2012. He is buried in Jefferson Barracks National Cemetery. He was awarded the Bronze star.