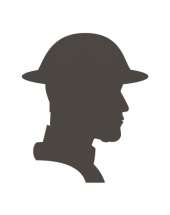 John lived 1310 N. Third Street in St Charles.  His occupation was listed as a painter for Hupe and Beste.  John enlisted in the Army in May and served during World War I. He had the rank of Private.  John departed Hoboken NJ for France on the Troop ship Leviathan on 3-AUG 1918 serving in 47th Infantry Company H.  In early August, the regiment fought near Bazoches-sur-Vesles during the Second Battle of the Marne.  In September and October 1918, the regiment fought near Cuisy, Septsarges, and Brieulles-sur-Meuse.

John was wounded in action and later died of his wounds 6-OCT 1918.  The War Department notified his brother (their parents had died) who was a merchant in St. Charles.  John’s brother Peter was wounded severely in the same battle.  The St. Louis Post-Dispatch reported on 16-NOV that John was the 18th St. Charles County man to die in the war.

John was the eighteenth St Charles County man to die in the War.  He has another brother Peter Nacke serving in France.  It was reported by the St Louis Star and Times his brother was wounded severely on November 22nd (Armistice was 11-NOV 1918).  Peter was in K Company 138th Regiment.