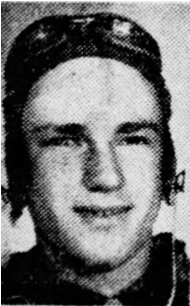 Joseph “Allen” Nacke was born 27-SEP 1925 in St. Charles at 528 Morgan Street.  He later lived at 1122 North 4th Street.  His father was Joseph Henry Nacke (1890-1976) and his mother Martha A. Englemeyer Nacke (1892-1985).  Joseph had two sisters; Marcella and Rosemary and two brothers; John and Gerald.  Allen had four years of high school and his occupation was in the manufacture of electrical machinery and accessories

Allen enlisted 18-SEP 1943 into the Army Air Corp and he became a ball turret gunner on a B-24 bomber in the 394 Army Air Force Bomber Squadron in the Pacific.

The squadron suffered devastating casualties and equipment damage during the Japanese surprise attack on Pearl Harbor, Hickam Field and other targets on the island of Oahu on 7-DEC 1941. For weeks after the attack, the squadron responded by patrolling the area around Hawaii to prevent another attack. The 4th also began gearing up for combat when it received its first Boeing B-17 Flying Fortress. The unit also had several LB-30 Liberators (B-24) assigned at this time and was redesignated the 394th Bombardment Squadron.

The squadron left Hawaii in November 1942 and began operations in the South Pacific Theater with a mix of B-17C/D Flying Fortresses and early LB-30 aircraft. It converted to very long-range B-24 Liberators in 1943 when the B-17s were withdrawn from combat in the Pacific and sent to Egypt for use in the Western Desert Campaign. It served in combat during the Allied drive from the Solomons to the Philippines. The unit flew long patrol and photographic missions over the Solomon Islands and the Coral Sea, attacked Japanese shipping off Guadalcanal, and raided airfields in the northern Solomons until August 1943. It then struck enemy bases and installations on Bougainville, New Britain, and New Ireland.

The squadron raided the heavily defended Japanese base on Woleai during April and May 1944 and received a Distinguished Unit Citation for the action. It helped to neutralize enemy bases on Yap and in the Truk and Palau Islands in June through August 1944, preparatory to the invasion of Peleliu and Leyte. The 394th flew missions to the Netherlands Indies. Completed a variety of missions from October 1944 until the end of the war, these operations including raids on enemy bases and installations on Luzon, Ceram, Halmahera, and Formosa; support for ground forces in the Philippines and Borneo; and patrols off the China coast.

On 17-OCT 1944, Staff SGT Joseph Allen Nacke was killed in action over New Guinea.  On 10-NOV 1944, the Marthasville record reported he was a ball turret gunner on a B-24 bomber and the 32nd St. Charles County man to give his life in this war.

Allen was brought home and is buried at St Charles Borromeo Cemetery.

The museum is looking for more information about Joseph Nacke.  I you can help, please contact the museum.

Joseph A. Nacke is honored and remembered at the St. Charles County Veterans Museum.