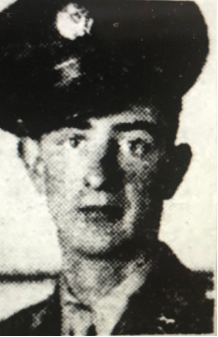 Nelson registered for the draft 15-FEB 1942.  He was unemployed at the time.  He later enlisted at Jefferson Barracks and served in the 143rd Infantry Regiment, 36th Infantry Division during World War II.  He attained the rank of Army Staff Sergeant.

On 20-JUN during a Battle, Nelson fearlessly exposed himself, crawling from his position to disable an enemy machine gun.  He would later be awarded a Silver Star, for his actions on this day.

He also was reported as missing by the Post-Dispatch as late as 11-JAN 1945.  Nelson W. LeSeieur was later reported as killed in action 17-DEC 1944.  According to U.S. Army burial records and the Post-Dispatch report dated 1-MAY 1945, “Nelson W. LeSieur Nelson was posthumously awarded the Silver Star for gallantry in action last 20-JUN 1944.  The citation related that as SGT LeSieur company advanced up a hill, the group was pinned to the ground by fierce enemy fire and was unable to return the fire.  Fearlessly exposing himself, he crawled from his position into a thicket 15 yards away, from which point he determined the exact position of the automatic weapon holding up his advance.  With one well-aimed shot, he killed the enemy gunner and completely disorganized the enemy company, forcing it to flee” it said.  Nelson was also posthumously awarded the Purple Heart.

Nelson W. LeSieur is honored and remembered at the St. Charles County Veterans Museum on the Wall of Honor.