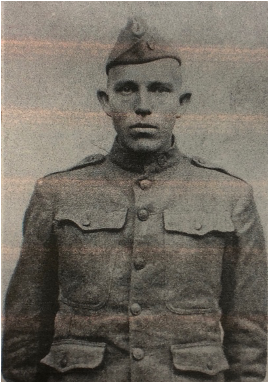 Arnold H Niederjohann was born 3-FEB 1893 in New Melle.  His father was Henry John Niederjohann (1858-1947) and mother was Anna Florentine Wilhelmine “Minnie” Welge (1865-1919).  Arnold’s father farmed near New Melle.  Arnold was a carpenter working in Foristell MO.  He had five sisters, Alma, Ida, Lydia, Olinda, and Alice.  He had two brothers, Edwin and Herman.  He was single when he enlisted in the Army on 5-JUN 1917.

Arnold was assigned to Company “C”, 356th Infantry, 89th Division Ambulance Companies and Field Hospitals (Archie Bowman, also on our Wall was also assigned to 356th but in A Company).  The regiment was organized 27-AUG 1917 at Camp Funston, Kansas.  Arnold departed New York on the troop ship Caronia.

According to government documents, Arnold worked as a mechanic although in letters to his parents to home he wrote he served as a carpenter.  Arnold’s regiment was eventually sent to the front near the small towns of Dommartin, Charey and Dampvitoux about 15 miles southwest of Metz and 125 miles east of Paris.

His regiment was relieved on 21-SEP and began to move away from the front.  However the next day, the 356th received orders to return for an early morning raid on Dommartin Woods advancing towards the German lines the next day.  Early in the morning on 23-SEP 1918, a portion of the 356th entered Dommartin Woods advancing towards the German lines.  Their raid was successful resulting in the capture of three prisoners partly due to the fact that the infantry was supported by Allied Artillery.  This artillery attack though resulted in enormous return fire by the German artillery during the regiment’s retreat through the woods.  One historian wrote, “In the darkness of the woods and heavy downpour of rain, the returning troops lost their way, became separated and suffered many casualties.”  Arnold Henry Neiderjohann was mortally wounded at about 5:00 AM.  He was killed by a high explosive shell 23-SEP 1918.  He was buried in his uniform the next day.

Three weeks later Henry and Minnie Neiderjohann were notified of their son’s death.  Sadly, in the following weeks, several men in Company C wrote the NeiderJohanns that their son had not been killed, but only severely wounded.  It is unclear why this confusion existed but the letters surely created false hopes for the NeiderJohanns.  In late December, Lt. Colonel Charles Pierce wrote a letter to Henry and Minnie Neiderjohann confirming their son’s death.  In January, Henry Neiderjohann sent a letter to Colonel Pierce requesting more information about the death of their son and a photograph of the battlefield grave.

As often the cases of nearly every American killed in action during World War I, Arnold Neiderjohann body would be reinterred more than once.  His body was moved to St. Mihiel for reburial in April 1919 and then disinterred again and reinterred on 14-AUG 1922 at the new St. Mihiel American Cemetery.  His parents declined, but could have taken advantage of a government offer to repatriation.  He remains buried at St. Mihiel American Cemetery in Thiaucourt France. Arnold was awarded Purple Heart and Victory Medal.

“In loving remembrance of mechanic Arnold Neiderjohann who was killed in action somewhere in France September 23, 1918, at the age of 23 years, 7 months and 20 days.

A precious one from us is gone;

A voice we loved is stilled.

A place is vacant in his home

Which never can be filled.

He was our pride and our delight;

He went through many a struggle

For he was loyal and true

To the red, white and blue.

He always thought he would return

To us again someday:

But now we shall not see his face

Sadly missed by relatives and