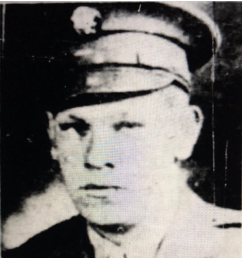 Omar A. Kolkmeier was born 15-JUL 1921 and lived in Harvester Missouri in St. Charles County.  He worked for Elmer Kolkmeier at 9th and Monroe Street in St. Charles MO.  He was the son of Mr. August H. Kolkmeier and Mrs. Bertha M. Lindemann.  He had three sisters; Grace, Louise, Ethel and two brothers, Arthur and Harlan.

Omar enlisted 25-NOV 1942 in the US Army.   He served in the 39th Regiment, Company B Combat Engineers (later known as the Corp of Engineers).  Sergeant Omar A. Kolkmeier and the 39th Combat Engineers left Algeria Africa on 10-JUL 1943 landing in Sicily 13-JUL 1943.  Omar then went to Naples-Foggia from 9-SEP 1943 to 21-JAN 1944.  On 22 JAN 1944 Omar landed with the Allied forces at Anzio during Operation Shingle.  The invasion was intended to outflank German defense forces on the Gustav Defense Line and strike directly for Rome. The operation failed and the invasion force was pinned down around Anzio until the end of May.  Operation Shingle was extremely costly and failed to open the road to Rome.  Omar was killed in action on the Anzio Beach head 26-MAR 1944.  He served 1 year and 5 months.

The stalemate at Anzio finally ended in late May 1944, when Allied forces broke through the Gustav Line in Operation Diadem. The Germans were forced to retreat north, and Rome fell 4-JUN 1944.  Omar A. Kolkmeier is buried in Friedens Evangelical Cemetery in Bellefontaine Neighbors in St. Louis Missouri.

Omar is honored and remembered at the St. Charles County Veterans Museum.