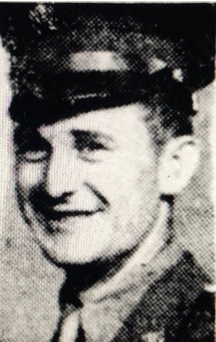 Omar Henry Rufkahr was born 29-MAR 1916.  He lived in St Charles, St Charles County Missouri.  His father was Joseph Herman Rufkahr and his mother was Marie F. Rufkahr.  His wife was Mrs. Dorothy Rufkahr, 307 South Second Street in St. Charles.  He was employed by Joseph Rufkahr working on a farm.  He registered for the draft on 16-OCT 1940.  Omar enlisted in the Army and served during World War II.  He was a Corporal in the 315th Infantry Regiment, 79th Division.

The division arrived in Liverpool on 17 APR and began training in amphibious operations. After training in the United Kingdom from 17-APR 1944, the 79th Infantry Division landed on Utah Beach, Normandy beginning on D-Day plus six 12-JUN 1944.  The division entered combat 19-June 1944, with an attack on the high ground west and northwest of Valognes and high ground south of Cherbourg.  The division held a defensive line along the Lauter River at Wissembourg from 20-DEC 1944 until 2-JAN 1945 (during the Battle of the Bulge), when it withdrew to the Maginot Line defenses (a line of concrete fortifications, obstacles, and weapon installations built by France in the 1930s to deter invasion by Germany).

The division remained on the defensive along the Moder until 6 February 1945. During February and March 1945, the division mopped up German resistance, returned to offensive combat and on 24-MAR 1945, crossed the Rhine and drove across the Rhine-Herne Canal.  It was during this action, Omar Rufkahr was killed in action on 24-MAR 1945.

From the St Louis Post-Dispatch dated 6-JUL 1945.  “Omar Rufkahr was killed in action while crossing the Rhine River on March 24.  He was the son of Mr. and Mrs. Omar Rufkahr and brother of Mrs. Al Jackson.  His cousin, a son of Tony Rufkahr saw Omar killed but wrote home, he will have to wait until he himself comes home before he can tell what happened since it is a military secret.”  Numerous papers tell the same story.  He was initially reported as missing in action the same day.  Omar was posthumously awarded the Bronze Star and Purple Heart.