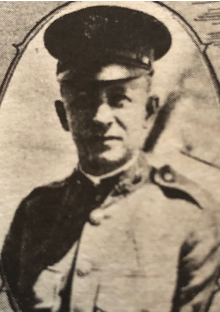 Oscar had tuberculosis. Oscar married Annie Louella “Ella” Smith on 8-JUL 1914, in Aurora, Missouri. He had met Ella at State Sanatorium in Mt. Vernon MO.  She had been a patient there but was a nurse when he came for treatment.  She nursed him back to health.  Oscar enlisted in 1917 during WWI and was stationed in Fort Stanton, New Mexico.  At Fort Stanton, he was appointed secretary to the commanding officer.  At Fort Stanton he contracted the Spanish Flu.  By the end of World War I on 11-NOV 1918, private sanatoriums across the state were filled to capacity with TB and flu victims.

Oscar and Ella left New Mexico and took the train in Kansas City, where Oscar fell ill and died.  She was with child at the time and went with to live with his parents until their daughter was born.  They had one child during their marriage. Aloysia Mae Buse was born on 19 JUL 1919.  Aloysia and her father would never meet.  Aloysia would later die as a teenager.

Oscar Aloysius Buse died as a young father to be on 14-JAN-1919 at the age of 28.  He was buried with full Military honors in St. Peter Cemetery in St Charles, Missouri.