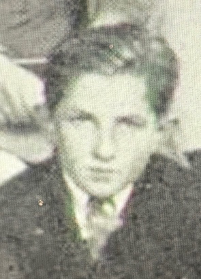 John “Jack” Welsh Osner was born in St Charles on 18-AUG 1919. In 1930 Jack and his brother Joseph were living with their grandparents, Paul and Sophie Pallardy, on Fourth Street in St. Charles. Jack also had one sister, Mary. Jack’s mother was Mayme Osner.  His father is unknown.  He attended St. Charles High School.

Jack registered for the draft 16-OCT 1940. He later served in the Army Air Corps as a navigator. Jack married Mary Johnson Meyer on 9-AUG 1941. They lived at 128 N. Sixth Street in St Charles MO.

On 8-JAN 1945, a flight of B-29 heavy bombers which included navigator 2LT Jack Osner, departed Pratt Airfield on a training mission.  Their route took them through the Caribean and Bermuda Triangle.  There were sixteen soldiers onboard.  The plane was last heard from at about 15:00 hours.  Tail number 42-6428 was a relatively new plane. There were no reports of mechanical difficulties, no distress call.  A search began immediately.  There were no reports of wreckage.  There were rumors of faint SOS messages for several days.  The search continued until 13-JAN 1945.

The press picked up the story.  The local paper, The Post-Dispatch reported 16-JAN 1945: “Lt John W. Osner, son of Mayme Osner was one of sixteen men aboard a four motored bomber reported missing today on combat training flight from the Pratt (Kansas) Army Airfield the post commandant announced. Lt. Osner, 27 years old, a navigator, is the husband of Mrs. Mary Osner who lives in Pratt.” He was presumed dead 8-JAN 1945. John Osner and the crew of B-29 tail number 42-6428 remain missing.

The St Louis Star Newspaper reported Osner missing 19-JAN 1945 during: “An overwater training flight from that base. The husband of Mrs. Mary Meyer Osner of 128 N. Sixth St. His younger brother LT Joseph Osner also an Air Corps Lieutenant is on duty in the Pacific theater.”

A book written much later tried to solve the mystery.  From the book, B29 – The Lost Flight of 428, by T. C. Geary, 2003: Osner was a veteran who served during World War II, as a navigator aboard a B-29. His plane was part of a squadron flying a training mission over the Bermuda Triangle, where they entered a storm. His was the only plane from the group that did not return.  The weather along the route was going downhill as the group approached the storm.  Command seemed to think flying straight through the storm on a straight line would be a good “training” exercise.  The entire operation was classified, restricted and confidential.

The lost souls of 428 include:

The disappearance of 428 remains a mystery.