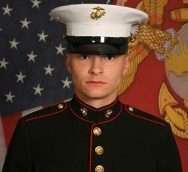 He lived the first five years of his life in Red Oak, Iowa.  At age 5, Daegan’s family moved to Omaha, and he attended Millard Schools from kindergarten all the way to his graduation from Millard South High School in 2016. In September 2017, Daegan signed a delayed entry program contract with the Marine Corps. In January 2018, he left Omaha for Boot Camp at Marine Corps Recruit Depot San Diego.

Daegan loved the brotherhood of the Marines and was proud to serve as a member of the 2nd Battalion, 1st Marine Regiment at Marine Corps Base Camp Pendleton, California. He deployed multiple times during his service and spent time in Japan, South Korea, Australia, Jordan, and Afghanistan. To Daegan’s younger siblings he was not only a Marine, but their real-life hero.

Throughout his 23 years, Daegan lived life to the fullest. He had a passion for hockey and started playing at a very young age. He went on to be a member of the State Champion Westside Warrior hockey team and was a lifelong Chicago Blackhawks fan. He was also a member of St. Paul’s Lutheran Church in Millard and Boy Scout Troop 331. Daegan loved to spend time outdoors, especially out on the water. He also was an avid skateboarder. Other hobbies included photography, music, art (especially sketching), playing video games, and joking around with friends and family.