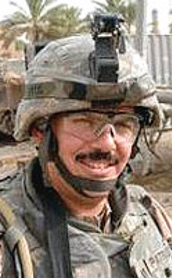 Travis Lyle Salle Patriquin was born 15-AUG 1974.  His father was Gary Patriquin and his mother was Connie Sallee Patriquin. Travis grew up in Bellefontaine Neighbors in North St. Louis County.  He had two brothers; Daniel, and Steven and one sister; Karrie.  In 1984, Gary Patriquin (Travis’ father) took a job in the Chicago area, and the family relocated.  Travis chose to return to the St. Louis area to attend high school at Francis Howell North High School.  During those years he lived with Reta Sallee Jenkins and Bill Jenkins his aunt and uncle.  He attended Francis Howell North, earning letters in track and football.  He graduated in 1992.

He enlisted in the Army after graduating from high school. During boot camp, Travis showed leadership potential and was drawn into Ranger training and the special forces. Travis also had a gift for picking up languages. He honed his linguistic skills at the Defense Language Institute in Monterrey, CA, and earned a degree from Campbell University in NC. He spoke seven languages and was fluent in Arabic. Most of the work he was doing in Iraq was classified.

After the attacks of 11-SEP 2001, Travis was sent to Afghanistan, where he received a Bronze Star after fighting behind enemy lines. Travis served in the 1st Brigade Combat Team, 1st Armored Division, in Giessen, Germany.

Travis died 6-DEC 2006. of injuries sustained when an improvised explosive device detonated near his Humvee during combat operations in Ramadi, Iraq.  Also killed was Spec. Vincent J. Pomante III.  At the time of his death, he was serving with the 1st Brigade, 1st Armored Division in Iraq.  Travis left behind his wife, Amy, and their three children, Emily, Harmon, and Logan.

His parents said of Travis on his death:  His death has been especially hard for our family, but we are taking comfort in the knowledge that God is with us and that Travis was doing what he wanted to do.  He was a career soldier, and he knew from a very young age that he wanted a military career. He was fascinated with survival training in activities such as the Boy Scouts. He was amazing. He could walk on a wire between trees 60 feet off the ground. He loved the thrill and the risk.

Services for Capt. Travis L. Patriquin were held at the St. Patrick Catholic Church in Rolla, MO, on 15-DEC 2006. Internment with Full Military Honors was at the Carty Cemetery in Dent County MO. The Pawnee Nation also honored him at the cemetery with songs in their native language and gifts for the children.  The book, A Soldier’s Dream: Captain Travis Patriquin and the Awakening of Iraq by William Doyle was released in June 2011. The author states that Travis was America’s T. E. Lawrence.